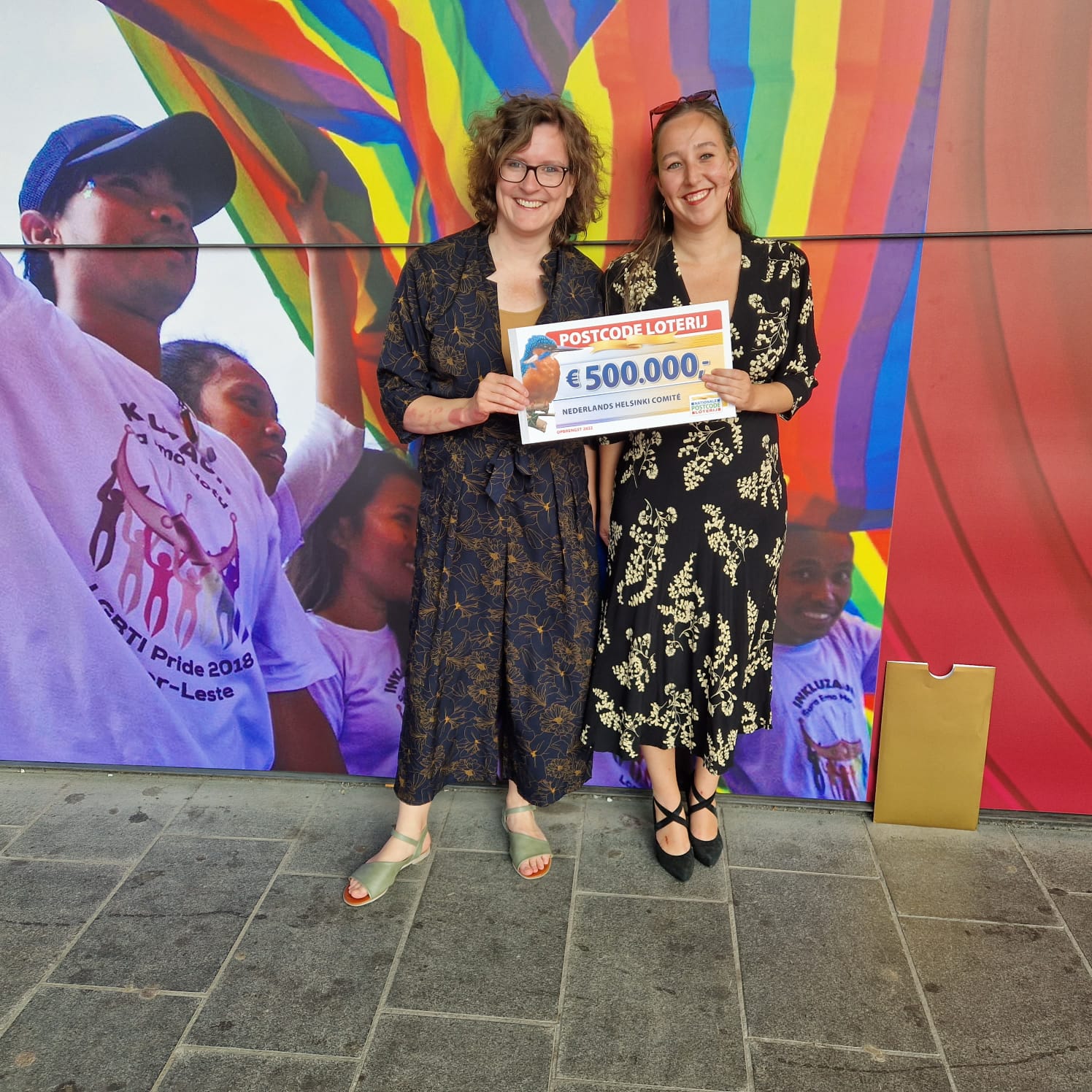 The Netherlands Helsinki Committee is happy to announce the Dutch Postcode Lottery will continue its funding for our organisation in the amount of EUR 500.000; to amplify democratic voices in Eastern Europe and keep the flames of human rights alive.

We are very grateful for the continued support of the Dutch Postcode Lottery and its players. Thanks to them, we were able to support human rights in Europe by amplifying voices of human rights defenders in the past years. With this new grant, we will continue to work with our partners in and from Eastern Europe in these times of war and crisis. Together we can keep the flame of human rights alive. – Kirsten Meijer, Executive Director NHC.

Our work in the region

NHC’s work contributes to a world in which citizens across Europe peacefully live in more open and just societies. Established 35 years ago, we represented Dutch civil society in the Helsinki Movement, bringing together human rights organisations based in Eastern and Western Europe. Ever since, we have helped building bridges between public institutions, international organisations, practitioners, and civil society. We take a holistic approach in strengthening the rule of law, safeguarding human rights, and building the capacity of civil society.

The NHC has a long-standing experience in working in Eastern Europe – more specifically, in Ukraine, as well as in Russia and Belarus. In the past years, our focus has been on a variety of programmes aimed at supporting human rights defenders and anti-corruption activists, criminal justice reform in which protecting the most vulnerable people is a key element, as well as strengthening integrity and accountability of governments and civil servants.

Partners from Ukraine and Russia were also part of our #BringHumanRightsHome campaign, developed in the scope of the ‘Samen (net)werken voor mensenrechten in Europa’ project supported by the Dutch Postcode Lottery. Together we raised awareness to increase the support for human rights defenders and strengthened the capacity of our partners in human rights communication to amplify their voices and enlarge their support base within society.

The war in Ukraine is making us witness some of the gravest atrocities in recent history. At the same time, it is also an attack on fundamental democratic values, not only in Ukraine, threatening the stability of Europe as a whole. The war in Ukraine has shown what can happen when human rights, democracy and rule of law are not protected. Freedom and democracy can never be taken for granted, which makes our mission for human rights, and open and just societies now more relevant than ever

At the core of what the NHC stands for, and in the spirit of the Helsinki Movement, is the belief that real security and therefore sustainable, lasting peace can only be achieved by building democratic, free and rights-respecting societies.

In recent years, we have seen the political opposition to the concept of human rights and the rule of law growing stronger not only in Russia, but also in Turkey and in certain EU Member States. As the NHC, we believe that we must continue to offer a stronger platform to civic society to counteract the shrinking civic space, and to better shield civil society organisations and Human Rights Defenders from attacks in those countries where civic space and the rule of law are under pressure. We must do so precisely in order to stop the rise of autocratic regimes such as Putin’s, in Europe and beyond, with all institutions and mechanisms at our disposal.

Our hope for the future: Keeping the flame of human rights alive

We are inspired by our partners and doing the best we can to stand in solidarity with them and people in need. Beyond supporting immediate needs with emergency support we have and will continue to focus on amplifying democratic voices in the region, in order to keep the flame of human rights alive and ensure long-lasting, sustainable peace – with thanks in part to the renewed support from the Dutch Postcode Lottery.

I think help for civil society is crucial at this stage, so organisations and individuals that are by nature efficient, flexible, open to change, can adapt their operation to best support the current situation. – Anzhelika Zozulia, a CSR specialist and chairperson of Plato, a Lviv-based environmental organization 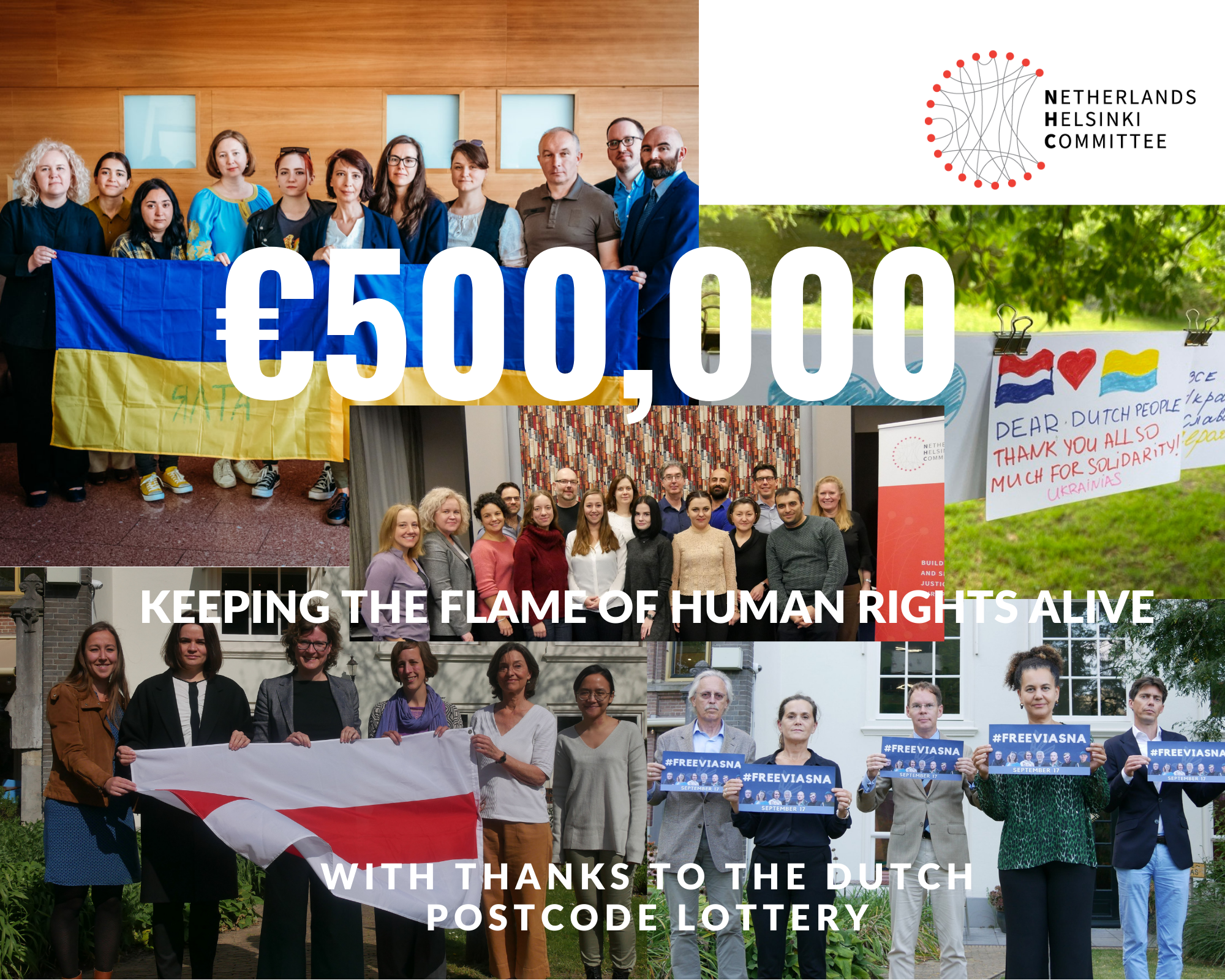 More on the NHC and Dutch Postcode Lottery:

More about the NHC and amplifying voices of human rights defenders in (Eastern) Europe:

More about the NHC and amplifying voices of civil society in Ukraine since 24 February 2022: