Thoughts from Ukrainian Civil Society: Illia Yeremenko on the nuclear threat and cutting Putin’s war efforts at the source 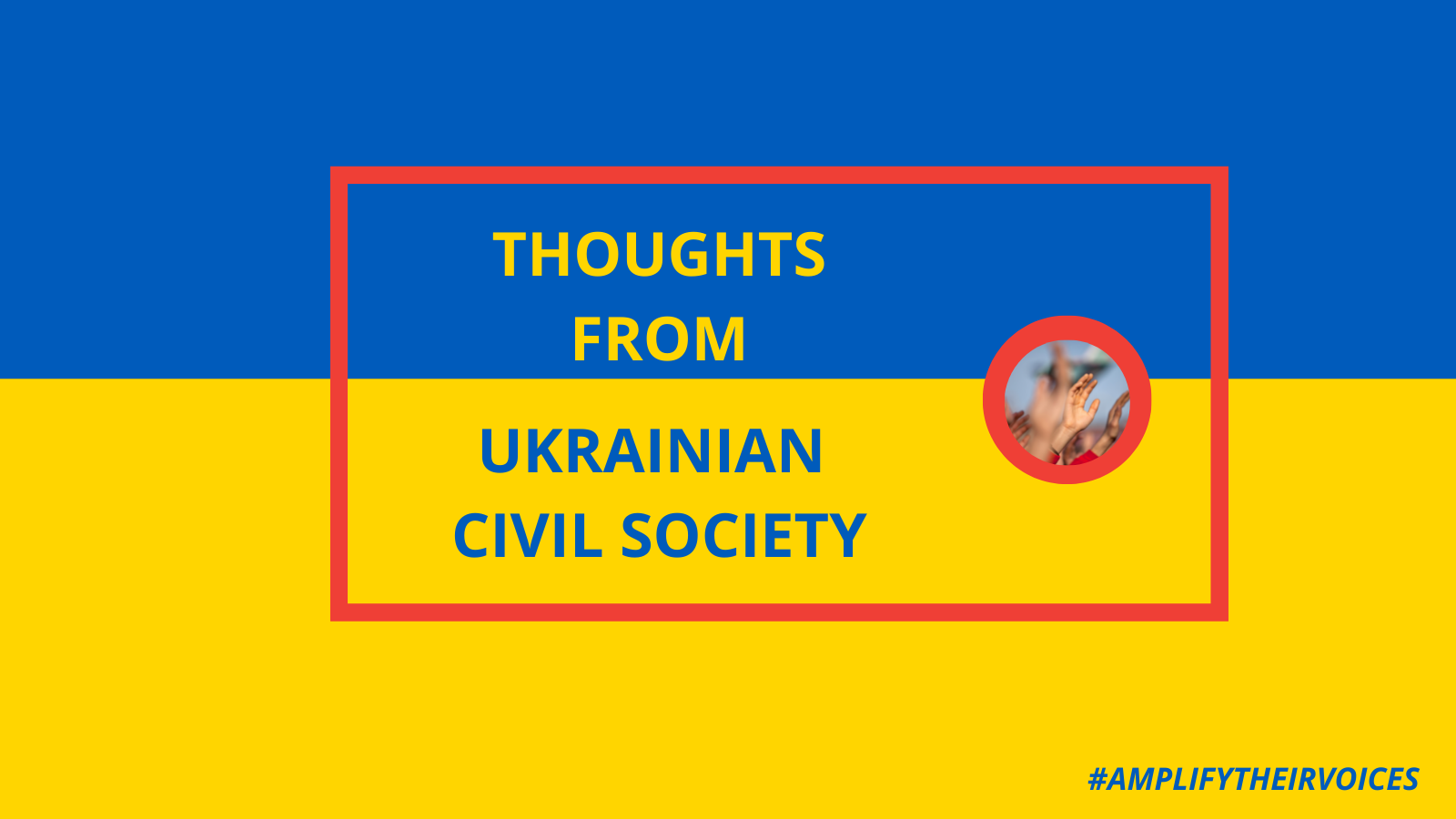 As the war in Ukraine rages on, here at the NHC we are continuing to stay in close contact with our partners, colleagues, and friends, identifying ways in which we can best support them.

This war is not only a humanitarian disaster. It is also a direct attack on our shared fundamental values. The war in Ukraine has shown that freedom and democracy can never be taken for granted. And yet, in these dark days, it helps to know that we are not alone. Together with our networks, alliances and partnerships we can amplify the voices of those fighting to build and secure justice, uphold human rights, and preserve democracy, and this is exactly what we will continue to do with all the energy and resources that we have.

Within this context, we sat down with Illia Yeremenko, environmental activist & trainer, who has worked with the NHC as an external expert on empowering civil society for reform in Ukraine. Once based near Kiev, working with and for NGOs on strengthening civil society and enabling sustainable energy reform, Illia now finds himself in the west of Ukraine, helping the humanitarian effort in any way he can. 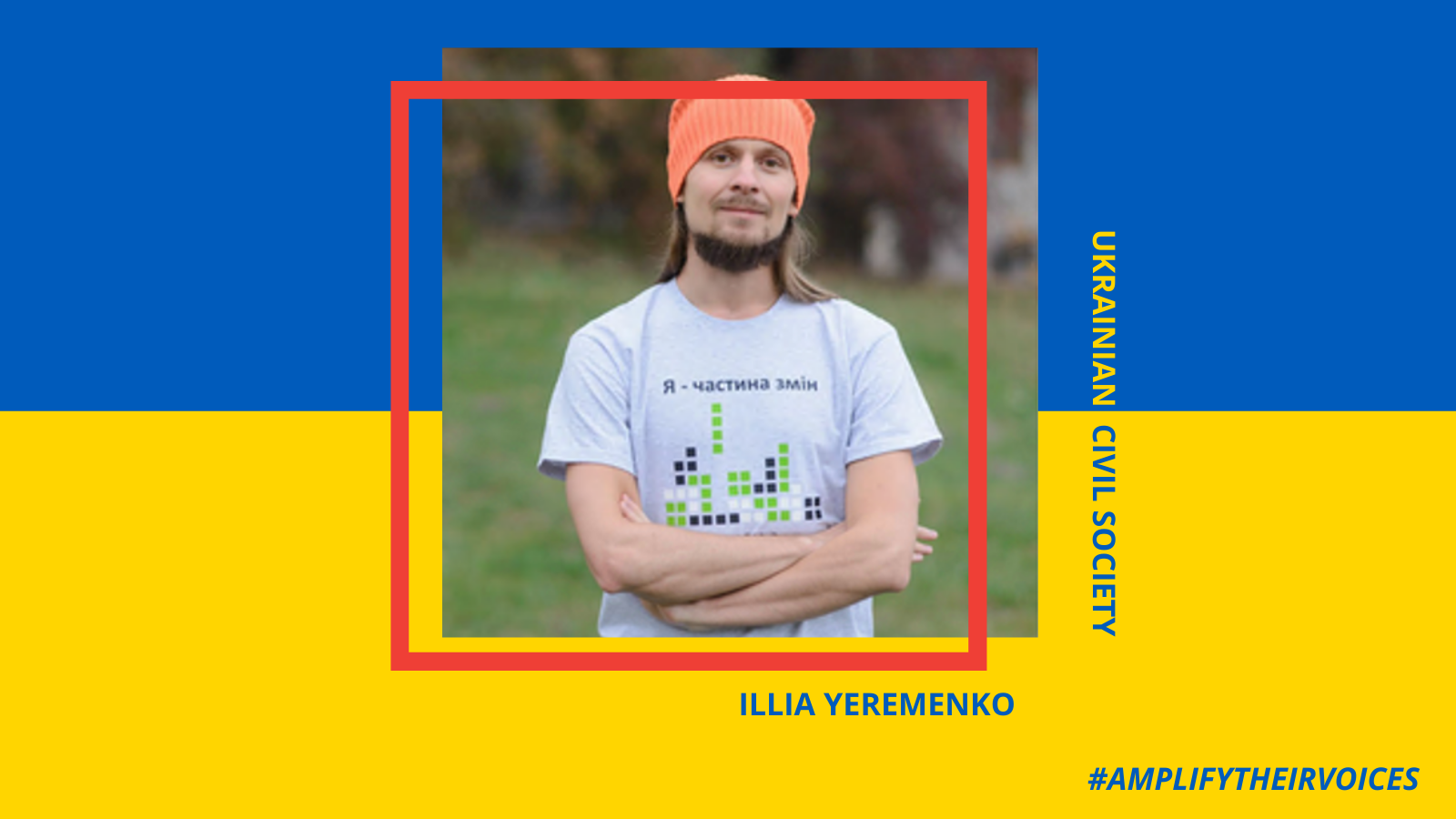 Photo from Correspondents of the World

Q: Illia, how are you doing? Are you safe? And what about your family and friends?

I am doing ok, relatively safe. There are alarms going off here, on and off, but no bombings in the vicinity as yet. I am currently in in Khmelnytskyi, having arrived here from the vicinity of Kiev. My family and friends are also in safety, but you know, whenever someone asks me that, I do feel that I need to reiterate:

all 40 million Ukrainians are like my family and friends right now and we are not safe until all of us are safe.

Q: What was your motivation to stay in Ukraine, and what is your work situation right now?

I briefly considered leaving before the invasion happened, but it did not feel right to leave my country behind. Now of course I am no longer able to leave, as all Ukrainian men age 18-60. But I don’t want to leave either, I feel like there is good I can do here – even if it never feels like enough. I am able to help with organizing logistics around distribution of humanitarian and other aid – like a shipment of solar panels we recently had arrive from Germany. Most acute now, here in the west of Ukraine, is the increased demand yet decreased supply of medical equipment and medicine. Those who are sick, wounded or suffering from chronic medical conditions are finding it harder and harder to come by the medicine they need for survival. We are all doing our best to help and organize the supply chains. We are sometimes able to drive across the border to pick up the necessary supplies and aid, but often men are not allowed to cross the border (as we officially cannot leave Ukraine). So some groups are looking for female truck and bus drivers to cross the border when needed; traditionally mostly a male dominated profession.

I have been helping where I can with translation of documents, statements and articles into English. But as I said, none of this feels like enough… Although I did read somewhere recently that, even those fighting at the front have this feeling, like there is always more you can do. If you’re fighting at the front, you feel like you could do more in active battle, and if you are in active battle, you feel like you could do more fighting near Kiev than in the east, or the other way around. Perhaps even Zelensky goes to bed with this feeling…

For now, we need to focus on what we can do, and help in any way in which we can, rather than focusing on the feeling of not doing enough – and this is true for us in Ukraine as well.

Q: Your expertise is environmental & natural resource economics. As an expert in the field, could you give us your take on the situation in Ukraine surrounding the nuclear centres, the environmental situation, and possible ecological impact of the war? What is your biggest concern?

A few organisations I have worked with in the past have sent several letters on matters of nuclear security, documenting the crimes that have been committed so far. Just last week, five leading experts on nuclear security called for international recognition of Russian military actions as the first ever case of nuclear terrorism, explaining why huge risk persists and why authorities must act now. The EU-Ukraine Civil Society Platform similarly issued a statement calling for a prompt reaction from western powers following the occupation of Chernobyl.

Even aside from the nuclear terrorism, it is undeniable nature will suffer in this war. Already there is so much destruction through the movement of troops, the bombing, and there is no care for nature at the moment. The Russian troops of course don’t care if they have to flatten a nature reserve to advance. There has also been talk of Russia using non-conventional weapons to further the invasion. So it is hard to predict what I am most worried about at this stage.

But one thing is for sure, the damage done and crimes committed, against people and nature, need to be recorded wherever possible, and those responsible need to be held accountable for their crimes.

Q: How can people help from outside of Ukraine? Anything you would like to share with people outside Ukraine, something we are perhaps not aware of and you think should be brought more to the forefront?

Looking back now, at how this all started, I am not sure if it is always clear in the West that the dependence on fossil fuels is what has made this war possible. Without the large sums of money going straight into Putin’s pocket to fund the war effort, by treating Russia as Europe’s gas and petrol station, and ignoring years and decades of human rights’ abuse and territorial aggression from an autocratic regime, this war would not have been possible.

In the prophetic words of John McCain, “Russia is a gas station masquerading as a country”. How ironic is it to realize North Stream 2 was approved into existence by western powers such as Germany and the Netherlands not even too long ago, and after Russia had annexed Crimea and parts of Donetsk and Luhansk oblasts of Ukraine. By ignoring the geopolitical game Russia has always been playing, the west has essentially ensured that Putin was able to continue his territorial aggression on neighbouring countries, alongside the increased repression of free speech, blatant disregard for human rights, and complete breakdown of rule of law in Russia itself.

Perhaps now is finally the time to declare and reduce a dependence on fossil fuels, and cut Putin’s war efforts at the source.

In the immediate future, alongside humanitarian aid, communication is key for us.

The west must understand that a peace making dialogue is impossible as long as we feel an immediate, physical threat.

Amplifying that message through the right communication channels is helpful. It should be clear that this is the last time Russia tries something like this, and what needs to follow from this is a deconstruction of an aggressive, authoritarian regime, whereby Russia is managed into becoming less of a threat for the region. There is no dialogue possible with Putin. Please support this understanding, rephrase and repeat: we cannot have a dialogue of peace as long as we are under attack.

We are fighting for the very existence of our country, for the right to exist as Ukrainians. I think countries in the west have forgotten what this feels like. That if Ukraine is taken over by Russian forces, and a puppet authoritarian regime is put into place, 40 million Ukrainians will no longer feel like they have a country, a nation they belong too. We will all essentially be displaced, even the ones who have stayed in the country.

Please realize we are fighting for our very existence, as well as our lives.