On March 31st the Netherlands Helsinki Committee and its partner organization in Bulgaria, Animus Association Foundation, organized the first Expert Meeting on human trafficking-related topics for lawyers, in Sofia. The first meeting is about the impact of trauma, memory and the ability of victims to declare detailed and consistently. Attention is also paid to communication between lawyer and victim/client.

The meetings are part of the project “Promotion of the Rights of Trafficked Persons in Bulgaria, Romania and Slovakia with Emphasis on Legal Support – A Human Rights-Based Approach“. This 3-year project focuses on the improvement of the access to and quality of legal assistance to victims of human trafficking and runs till the end of 2015.

In late 2014 the Netherlands Helsinki Committee, in collaboration with its partners trained more than sixty lawyers in Bulgaria, Slovakia and Romania to provide legal aid to trafficked persons. In 2015 three Expert Meetings per country will be organized on timely topics relevant for lawyers who have been working with (or intend to work with) trafficked persons. In this context, the Netherlands Helsinki Committee will continue to work in partnership with Animus Association Foundation (Bulgaria), The Human Rights League (Slovakia), ADPARE – The Association for Developing Alternative Practices for Reintegration and Education (Romania) and Association Pro Refugiu (Romania).

The Expert Meeting in Sofia is the first in a series of working meetings aimed at specializing lawyers in providing proper legal aid and representation to victims of human trafficking. In all three project countries (and in the Netherlands) statements of victims are often considered inconsistent and therefore untrustworthy. Lawyers know little about the impact of trafficking on a person and the consequences of trauma. The one-day working meetings will consist of presentations of international experts, practical exercises, role plays and panel discussions with other stakeholders such as judges and prosecutors. 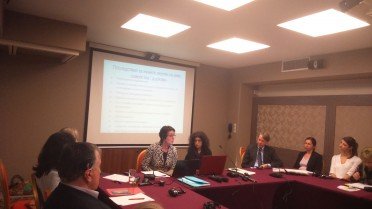 Meeting each other on a regular basis provides the lawyers with opportunities not only to learn about the phenomenon human trafficking, but also to exchange experiences about cases and providing each other information and tips. The project wants to identify best practises and create new best practices by doing strategic cases.

The other meetings will focus on the importance of good cooperation between prosecutors and lawyers and on compensation for victims.

One of the problems many countries have in common is the lack of access of victims of trafficking to legal aid and representation. There are very few lawyers trained in working with trafficked persons. State-funded legal aid is scarce and often limited to no more than the formal presence of a lawyer during the trial. States tend to focus on the prosecution and punishment of the perpetrator. Often victims are purely seen as instrumental for the prosecution with little regard for the far reaching impact testifying may have on their current and future wellbeing, safety and life. Some times the victims are disrespectfully treated by representatives of the judicial system itself. As a result criminal proceedings often lead to the secondary victimization of the victim. This is also the case in Bulgaria, Slovakia and Romania.

The partners in this project strongly believe that no trafficking victim should have to face a criminal (and civil) case without an attorney. Victims should be appointed one attorney from the early start (from the time of the identification of a victim). That way the victim and lawyer can get to know each other and build a relationship of trust and understanding. Because in reality in these three countries victims often have to cooperate with more than one, state appointed lawyer, who is not sensitized to the trafficking phenomenon nor aware of what trafficking really is and what the consequences are of trauma on a person, on his/her emotions, behavior and memory. Lawyers should from the early start inform their client about their rights, the legal proceeding, what to expect in a court session as a witness, who are present in a session, and possible questions, so that the victim can decide if he/she wants to give a statement, or not.

For more information about the project or the expert meetings please contact Julia Koster, project manager at the Netherlands Helsinki Committee.

This project is financed by the European Commission. The Dutch Ministry of Foreign Affairs provided funding for in total nine Expert Meetings in Bulgaria, Slovakia and With the financial support of the Prevention of and Fight against Crime Programme European Commission – Directorate-General Home Affairs