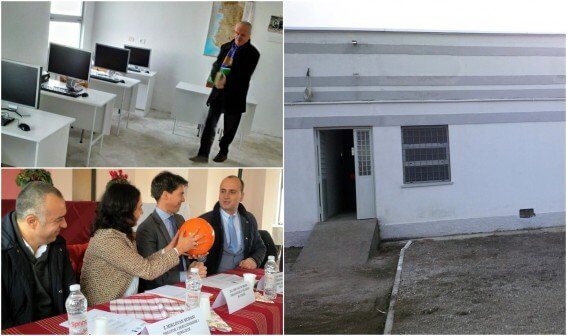 On January 17, the NHC’s director Pepijn Gerrits gave a speech at the opening ceremony of the new juvenile detention facilities at the Shën Koll prison in Lezha, Albania. The inauguration marked the successful outcome of a three-year long endeavor to improve the living conditions of juvenile detainees. The renovation was largely funded by a grant from the Netherlands Ministry of Foreign Affairs. Please read his speech below.

Address at the inauguration ceremony of the new juvenile detention facility in Lezha, of Mr. Pepijn Gerrits, director of NHC

Today is a special day, as we are delighted to be present at the inauguration of the new premises for juvenile detainees awaiting their trial in the Lezha detention facilities, the Shën Koll Prison. Approximately three years ago, at the start of our programme that aims to enhance the living conditions of juvenile detainees, the prison authorities of Albania committed to creating a new independent facility for juveniles in Lezha, as living conditions were below international standards. In fact: the facility in Lezha did not meet the minimum criteria needed to start the programme aimed at improving the living conditions.

In cooperation with the Albanian Directorate General of Prisons, the Dutch Embassy in Tirana and Cordaid, a non-governmental organisation from the Netherlands, the Netherlands Helsinki Committee managed to secure support for the renovation of the juveniles’ section in Lezha. Upon securing the funding needed to finance the renewal and renovation, the Directorate General of Prisons and the NHC worked together in a combined procurement procedure. After a careful selection process, in which the NHC was duly represented by an independent engineer, Mr. Fatos Brovina, construction company JV Mandi was selected to complete the reconstruction works efficiently and within the agreed time-frame.

I would therefore like to start by thanking the Director and staff of the Albanian Directorate General of Prisons for the smooth cooperation throughout the renovation process. I would also like to extend a word of thanks to Eng. Fatos Brovina and his wife, Mrs. Gjenovefa Brovina, for their support to get the job done on time, leading to a safe environment for juveniles in pre-trial detention.

However, the completion of this facility would not have been possible without a grant from the Netherlands Ministry of Foreign Affairs, duly represented by Ambassador Dewi van de Weerd, and Cordaid.

We trust that this newly opened facility will offer juveniles support and opportunities that were previously non-existent in Shën Koll Prison, through enhanced education, vocational training, by building social skills and offering meaningful recreational activities. Unfortunately, the opening of the new facility comes too late to be part of the multi-year programme that goes by the title of “Improving of the prison conditions for reintegration of juvenile detainees in Albania, Kosovo and Macedonia”, financed by the Dutch Foreign Ministry, and implemented by the NHC in close cooperation with the DGP, the Albanian Helsinki Committee and the Dutch Prison Service.

This programme focuses on strengthening the capacities of staff in pre-trial detention facilities to improve living conditions and thus to ensure young detainees live in a safe environment in which they are offered the possibility to take part in a purposeful programme that prepares them to participate in a meaningful way in society after release. At the start the NHC aimed at implementing the programme in both Vlora and Lezha, following a successful experience in the Kavalja juvenile prison. As said before, it was unfortunate that due to the bad conditions of the Lezha prison facility the programme mainly focused on Vlora, while only inviting the Lezha staff to a reduced number of activities.

As shared with some of you during the ‘open day’ at the Pre-Trial Juvenile Detention Centre in Vlora last September, the NHC is glad to observe some positive results reached by the programme as the daily program has been adjusted, implementation of business cases has started and the staff have become experienced with the YOUTURN methodology, which has been integrated into their management structure.

These changes are important steps towards fulfilling the EU accession requirements. However, let us not forget that the process to alignment to international and European standards is long and challenging. Only last November in its annual Communication about the state of the enlargement process, the European Commission reported about Albania stating that, and I quote:

“More efforts are needed to bring existing legislation on juvenile justice in line with international standards and move away from the punitive approach for juveniles in conflict with the law. A number of laws are being revised under the justice reform to bring juvenile justice into line with UN standards. A specific juvenile justice code and a children’s justice strategy are being drafted. In 2015, 130 fewer children were sent to pre-trial detention than in 2014 and the average detention time was reduced. However, appropriate planning, budgeting and community-based re-education and reintegration programmes for children in conflict with the law are still lacking.”

NHC is convinced that serious steps have been taken and will continue to be taken. We therefore continue to support these reforms, as well as an active role for civil society, in order for detention centers to be monitored in accordance with the implementation of the UN Convention of the Rights of Child (CRC), the rules on National Preventive Mechanisms (NPM) and the Optional Protocol for the Convention against Torture (OPCAT).

As stated, the NHC remains committed to actively protecting the human rights of every child and adolescent, and pays specific attention to those in conflict with the law. As we have an active engagement in the Western Balkans through the previously mentioned programme, we plan to continue investing in improving the situation of juveniles in conflict with the law in Albania. We sincerely hope that we can build further upon the foundations laid, not only here in Lezha, but also in Vlora and Kavalja. That means building on the trust and mutual respect acquired over many years of continued engagement of our partners at the Netherlands Custodial Institutions Agency. This has had the continued support of both the Netherlands Ministry of Foreign Affairs and the Ministry of Security & Justice, to assist and cooperate with the Albanian Directorate General for Prisons and staff of the various Penitentiary Institutions to ensure improvement of living conditions of juvenile detainees.

On behalf of the NHC and the entire project team, I would like to once again compliment the Director of the Lezha prison Mr. Kurti and the Director General for Prisons, Mr. Kopani, for completing the renovation. We hope that both will continue to invest in improving living conditions. The methodologies and skills in which the staff in Vlora were trained could prove a useful base to train the staff in Lezha and eventually also in other facilities, such as Kavalja. We hope that the wide implementation of these methods will have a lasting and sustainable impact on improved conditions in this institution and on its population. Moreover, we hope that through sustaining these results, the project will provide juveniles with more opportunities and thus will contribute to improving their chances at successfully reintegrating into society.