He had a bit of blank face while looking around him at the other juveniles, some of whom were writing away furiously and others who, like him,  were also looking around them vacantly. The question that they were asked to answer was: What would you want to change in your institution? Soon after, his neighbour stepped in and started writing for him. It was not that he did not want to answer the question; it was that he could not, his neighbour explained while proudly informing us that he was writing his answers for him. Perhaps unsurprisingly, one frequently recurring answer to what they would like to see changed in their institution was: education.

A juvenile during a session by the University of Applied Sciences Leiden in ECI Tetovo, North Macedonia

Giving a voice to incarcerated minors

The question: What would you want to change in your institution? was asked in a feedback session in the recreation room of the juvenile institution of Educational Correctional Institution (ECI) Tetovo in Volkovija, North Macedonia. The boys’ answers formed part of the living climate measurement by the University of Applied Sciences Leiden (Hogeschool Leiden). Education came out of the survey as one of the most critical elements.

The living climate measurement is conducted as part of the NHC’s recently finished collaborative project on creating a safe, stimulating and rehabilitative prison environment for Juveniles in Albania, Kosovo and North Macedonia, funded by the Ministry of Foreign Affairs’ Matra programme. Rita Selimi, a PhD student from Kosovo, has long worked on the project and has been active in measuring the living climate in the juvenile institute in Lipjan. Rita emphasised the importance of literacy for the boys in understanding what a form or survey is actually asking. If you cannot read the questions on the survey – or not well enough to understand what the question is asking – it hinders the juveniles’ ability to express their needs formally. The ability to be able to advocate for oneself if a vital part of being an active member of the community and gaining ownership over their own resocialisation and reintegration trajectory.

“One of the boys became very emotional, saying that he had never before been taught how to deal with his emotions or what social decision making was, for example. It was through the TOPs! programme that he had learnt this for the first time in his life.” (Staff member, ECI Tetovo)

One promising practice has been ECI Tetovo’s extra-curricular programme, where the boys were actively involved in a range of vocational activities, everything from building furniture for the premises, to cultivating potatoes, to art and music workshops. One of the recent releases at Tetovo was active in producing music from inside the prison. Additionally, through the project the juvenile institutions in Albania, Kosovo and North Macedonia are adopting resocialisation programmes, such as the COPOSO trainings, offered through the project by Young in Prison and Caritas Albania and Kosovo as well as the TOPS! Programme developed by Stichting 180 that has now become part of the institutions’ school curriculums. 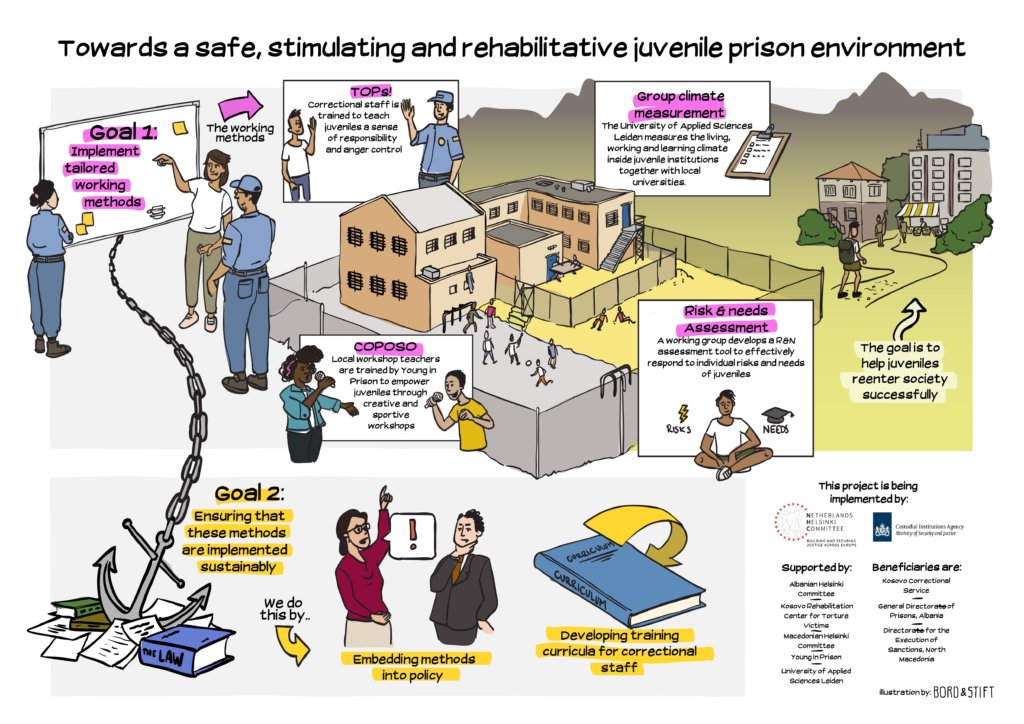 “This is the first time we received a methodology that fits our professional statue and suits well with the target group” (TOPs! instructor, QKL/QEKL, Kosovo)

According to Patricia Meijer, Senior NHC Expert and TOPs! Instructor from Forensic Centre Teylingereind, the TOPs! Programme provides professionals in criminal justice institutions with the knowledge and skills on how to deal with behavioural problems of incarcerated minors. The core premise of TOPs! is training professionals to help the incarcerated minors understand and ultimately change their behaviours. , by creating a better climate in the closed institutions, which is needed to work towards rehabilitation.

“I am grateful for the TOPs! trainings, no one has ever taught me these important things” (Incarcerated Minor after a TOPs! training in conversation with Patricia Meijer, ECI Tetovo)

As part of NHC’s collaborative project, over the years in Albania, Kosovo and North Macedonia the TOPs! methodology was woven into the fabric of the institutions’ everyday activities. This is reflected in everything from solving behavioral problems to supporting the moral development of the minors. The TOPs! methodology is “a way of teaching children, in a multidisciplinary way, how to become responsible adults. The staff acquired knowledge and skills on how to observe and understand the behavioral problems of the minors that they have to deal with on a daily basis.” – Patricia Meijer, Senior Expert NHC and certified TOPs! trainer with Stichting 180

For more on the TOPs methodology: https://www.nhc.nl/towards-a-safe-stimulating-and-rehabilitative-juvenile-prison-environment-tops-training/ (thumbnail image)

Lack of governmental and public support

While its value is widely recognized, and even with various methodologies such as TOPs! becoming part of the institutions’ curriculums, implementing a sustainable form of education in prisons has proven challenging. Education is not always a guarantee for children in closed facilities, which is a big risk factor for both reintegration and rates of recidivism.

In North Macedonia, for many years formal education for juveniles in closed facilities was only sporadically provided through temporary programmes. Over the last three months, a pilot project was conducted in ECI Tetovo, focusing on providing training for mixed classed of both illiterate and literate juveniles. Both teachers and juveniles were very satisfied with the progress and implementation. Unfortunately, the provision of education to these juveniles remains vulnerable and inconsistent, with a sustainable solution still lacking.

A lack of willingness of actors from outside the institutions, often driven by prejudice, can also play a large part in the systematic lack of sustainable formal education in juvenile institutions. Many times, stigmatization of detained juveniles makes local communities, schools and teachers resistant to welcoming these children in their schools. Moreover, teachers do not always feel sufficiently supported or competent to provide education to children with certain behavioural problems. Increasing public awareness as well as fostering good cooperation between schools and penitentiary institutions is key in overcoming these obstacles.

For more information about the issues regarding education for incarcerated youth in North Macedonia, please consult the following findings from NHC’s partner organization the Macedonian Helsinki Committee for Human Rights: