Report on successful training for prison guards in Libya 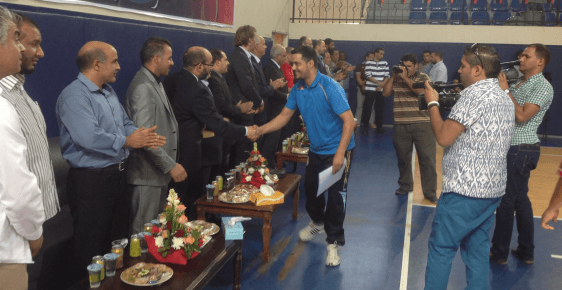 Between October 17 and November 1, three employees of the Dutch Custodial Institutions Agency (DJI) visited Libya in order to execute the training program put in place as part of the Enhancing Professionalism in the Libyan Prison Service project led by the DJI in partnership with the Netherlands Helsinki Committee.

The main objective of the training program was to educate and prepare a select group of Libyan prison guards in important facets of their job such as posture, communication and dealing with violent and/or aggressive behavior. After having conducted the training program, the three DJI trainers Thijs Biemans, Harry Hittema and Chakib El Aomari concluded that while there is still room for improvement, they have enough reasons to be happy and satisfied with the project’s results so far.

Notable progress has been observed by the trainers in comparison to their last visit roughly six months ago. It has become evident that Libya’s police force is more present throughout society and are determined in striving towards international standards of quality and behavior. While many essential institutions, such as the judiciary system, are still not functioning adequately, it is clear that there is a nation-wide desire to improve and progress.

The training program consisted out of 16 participants, who spent several days working on issues such as improving their physical condition, team spirit, attitude-awareness, proportional intervention and self defense. The progress made by the different guards during the training sessions has been undeniable, and at the end of the program 14 of the participants were adequately trained and rewarded with a formal certificate.

Looking back, the training sessions were a great success according to everyone involved. The trainees are happy with the material which they believe can be put to good practice. The Libyan Minister of Justice Salah Margani, who was present at the concluding session of the program, was highly enthusiastic about the progress made and stated that the program is a valuable contribution to the ongoing improvement of Libya’s security services. Through mutual agreement, the decision has been made to continue the cooperative effort in order to further improve Libyan prisons. An important focus point for future operations will be to enable the trainees to transfer the taught material to their untrained colleagues. The continuation of the project is scheduled to start in January 2014, further developments will be reported on soon.