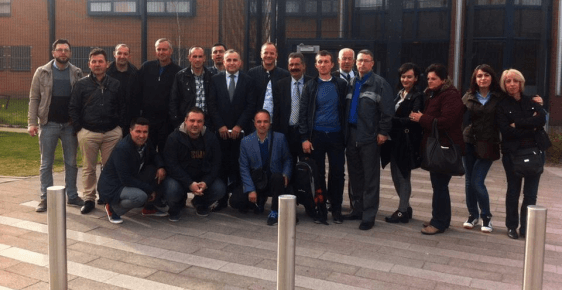 From 28 April until 1 May, the Netherlands Helsinki Committee and Dutch Custodial Institutions Agency (DJI) organized a study visit in The Netherlands for sixteen representatives from the Correctional Centre (CC) Lipjan in Kosovo, a representative from Kosovar Rehabilitation Centre for Torture victims (KRCT) and the General Director of the Kosovo Correctional Service. The study visit is one of the project activities of the MATRA CoPROL projects ‘Improvement of Prison Conditions for Reintegration of Juvenile Detainees in Albania, Macedonia and Kosovo’ that the NHC and Dutch Custodial Institutions Agency have been implementing since 2013. The participants visited Juvenile Custodial Institution, Teylingereind in Sassenheim, Juvenile Judicial Institution, Lelystad Intermezzo and (adult) Penitentiary Institution Lelystad. The visitors became familiar with the methodology and the daily work of Dutch staff and management, focusing on effective resocialization of juvenile offenders.

Two of the participants from CC Lipjan, Kumrie Haxhiu and Ekrem Gashi, gave a short interview about their experiences. Ms. Kumrie Haxhiu is a social worker and a trainer of EQUIP program within the project from NHC and Dutch Custodial Institutions Agency. She was very pleased to have this exchange of professional experiences. While spending a week in The Netherlands for this study trip, her main focus was to observe a regular working day of the two juvenile institutions, as well as to become familiar with the organization and training of the EQUIP program. What caught her attention at the juvenile institution, during the interaction with the Dutch staff, was a close cooperation between the staff members. Likewise, she observed how they created a positive culture to form a family environment for the juveniles. In fact, Ms. Haxhiu works very closely with the juveniles at CC Lipjan, where she gives advisory sessions to empower and support juveniles to stabilise their life and support them in their education, social and professional development. During this trip, what she found most significant was to observe the supervision of the staff and the collaboration with volunteers in various juveniles’ projects.

Another participant, Mr. Ekrem Gashi is also an EQUIP trainer that conducts training for their staff at CC Lipjan. Among his tasks is making sure the juveniles are aware of the house order and the daily routine. He ensures that juveniles are involved in programs, school and other activities. During his study week, he described his experience valuable in all aspects, starting from the hospitality, cooperation and the EQUIP program. In his observation, the Dutch staff was extremely well prepared and coordinated in their tasks and all the activities that were being developed in these juvenile centres. He found the visit very useful and inspiring starting from infrastructure, activities, programs and most important the cooperative and professional staff.