The NHC Notes the Outcome of Turkey’s Third Universal Periodic Review, Calls on the Government to Respect its Commitments 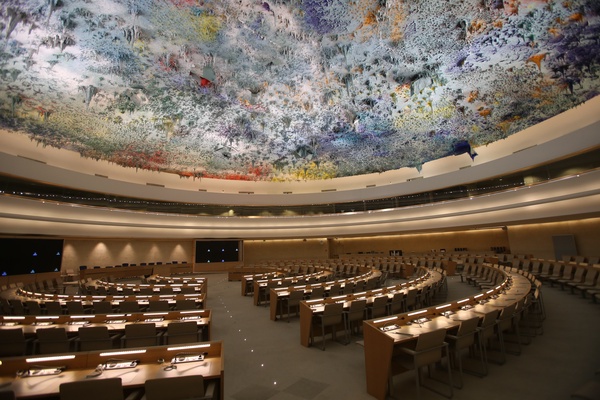 On 29 September 2020, the outcome of the Universal Periodic Review (UPR) of Turkey was formally adopted during the 45th session of the United Nations Human Rights Council (UNHRC). Since 2006, the UPR process assesses the human rights records of all UN Member States, and serves as a mechanism to bring attention to human rights violations and to allow States to report on progress towards fulfilling their obligations in line with international commitments.

In advance of each State’s Review, the Council invites civil society organisations to share information about the national human rights situation and to provide recommendations for improvement. In July 2019, the Netherlands Helsinki Committee (NHC), together with five other NGOs, submitted a briefing paper to the Council. This included eleven recommendations to address the situation of human rights defenders (HRDs) in Turkey. Together with the Association for Monitoring Equal Rights (Eşit Hakları İzleme Derneği), Front Line Defenders (FLD), International Service for Human Rights (ISHR), Kaos GL Cultural Research and Solidarity Association (Kaos GL Kültürel Araştırmalar ve Dayanışma Derneği), and the Truth Justice Memory Center (Hakikat Adalet Hafıza Merkezi), the NHC called upon participating Council states to urge the Turkish government to prioritise the protection of HRDs.

During this third cycle of Turkey, the Working Group on the Universal Periodic Review’s report listed 302 recommendations to Turkey, of which 17 were related to the situation of HRDs. Recommendations included bringing Anti-Terror legislation in line with international standards and ending the practice of using it to interfere with the freedom of the press; ensuring a safe environment (both online and offline) for HRDs to continue their peaceful and legitimate work; abstaining from arbitrary arrest; and ensuring that HRDs can exercise their fundamental freedoms without retribution. Of the 17 recommendations related to HRDs, Turkey supported 13, however, asserted that they have “already been implemented.” Turkey simply took note of the remaining 4 HRD-related recommendations, which dealt with issues such as bringing the Anti-terror legislation in line with international standards, ending the excessive prosecution of journalists and HRDs, and adopting comprehensive legislation for the protection of HRDs.

The NHC regrets that Turkey did not accept all 17 recommendations relating to HRDs, and is concerned by the assertion that some have already been implemented, given the ongoing assault on those that work peacefully to uphold basic standards of human rights, fundamental freedoms, and the rule of law. Since the last review of Turkey in 2015, crackdowns against civil society have increased immensely, particularly following the State of Emergency imposed in the aftermath of the 2016 coup attempt. While the State of Emergency officially ended in July 2018, violations of fundamental rights and freedoms, arbitrary detentions and imprisonments, and smear campaigns led by pro-government actors have continued. The legislation adopted during the State of Emergency, which by its nature should have been applicable only temporarily, is still in force. With this legal framework as backing, unprecedented waves of detentions and prosecutions continue, and are accompanied by the erosion of fair trial rights, with HRDs and critics of the government falling victim to politically-motivated investigations on terror-related and libel charges.

Effects of the pandemic

This situation has only worsened due to the COVID-19 pandemic. While restrictions to counter the spread of the virus have been deemed necessary in the interest of public health, the government of Turkey has imposed disproportionate measures that further restrict fundamental freedoms. As one example, health rights defenders warned early on about the dangers of the virus spreading in prisons, where space for distancing and facilities for sufficient hygiene are limited. While Turkey did allow for a significant number of prisoners to be released to alleviate that risk, the move was applied in a discriminate manner, with all political prisoners, including HRDs and journalists (who have been imprisoned under the questionable Anti-Terror legislation, among others), explicitly being excluded. Moreover, under the guise of limiting and prosecuting the spread of false information about the virus, which might “cause fear and panic among the public,” the government effectively silenced health practitioners and journalists who feared or suffered interrogation for their efforts to cover the developing pandemic.

The treatment of many other HRDs also shows worsening trends: In April 2020, the President of Religious Affairs (Diyanet) made discriminatory statements towards the LGBTQI+ community and people with HIV, including hate speech and spreading false information about the targeted group. Bar associations that stood up in defence of the targeted LGBTQI+ community are now being interrogated for “insulting the religious values adopted by a part of the people.”

In July 2020, prison sentences were handed down against four of the eleven defendants of the so-called “Istanbul-10” trial, and in September, 47 lawyers were taken into custody, accused of acting on the order of a terrorist organisation “under the guise of attorneyship activities.”

Given the worrying human rights situation in Turkey, which has only intensified during the pandemic, the NHC calls on Turkey to accept and effectively implement all 17 of the HRD-related recommendations made during this 3rd UPR cycle, and ensure that HRDs can carry out their peaceful and legitimate activities without fear of attack, reprisal, or judicial harassment.