Training on shadow reporting in Kyrgyzstan 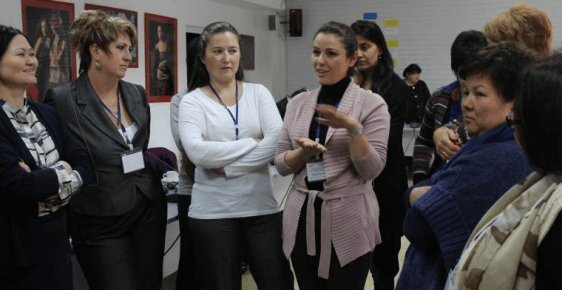 The Netherlands Helsinki Committee, together with the Child Rights Defenders League of Kyrgyzstan, organized a training on writing a United Nations shadow report and undertaking advocacy with the report. The training was held from 25-27 October 2013 in Bishkek, Kyrgyzstan. There were 12 participants from Kyrgyzstan and Tadzhikistan. All participants are from organisations working with the Netherlands Helsinki Committee in the project: “Countering discrimination of women and children and promoting their rights by changing social and economic policies in Uzbekistan, Kyrgyzstan and Tajikistan”.

Tadzhik organisations were involved in a coalition writing and submitting a shadow report to the Committee for the Elimination of All Forms of Discrimination Against Women (CEDAW). At the time of the training concluding observations of CEDAW had just been published (Not yet available on internet). The organisations will now prepare follow-up advocacy based on concluding observations which include many of their own recommendations. In addition the coalition of organisations working in the context of the project managed by the Netherlands Helsinki Committee will start work on a shadow report for the Committee on Economic, Social and Cultural Rights.

During the training it became evident that human rights work by independent non-governmental organisations in Tadzhikistan and Kyrgyzstan is under increasing pressure. In Uzbekistan such work has become virtually impossible. In Tadzhikistan pressure is mounting, especially in view of upcoming elections, while in Kyrgyzstan a number of draft laws are in Parliament inspired, amongst others, by the ‘foreign agent’ law in Russia

The project: “Countering discrimination of women and children and promoting their rights by changing social and economic policies in Uzbekistan, Kyrgyzstan and Tajikistan”, is a project funded through the Human Rights Fund by the Ministry of Foreign Affairs of the Netherlands. It started in July 2011 and will finish on 30th of June 2014. The project is managed by the Netherlands Helsinki Committee, together with organisations from Tadzhikistan, Kyrgyzstan and Uzbekistan.