The 2017 Dutch election results and the parties’ compliance to rule of law, human rights

On March 15, 2017, the Netherlands held general elections to seat 150 members in the House of Representatives. Results revealed that the current Parliament majority, the People’s Party for Freedom and Democracy (VVD), has retained the majority with 33 seats with the far-right Party for Freedom (PVV) placing second with 20 seats. The Labour Party (PvdA), which held a majority coalition with VVD in the previous term, has now lost 29 seats and currently only holds nine. 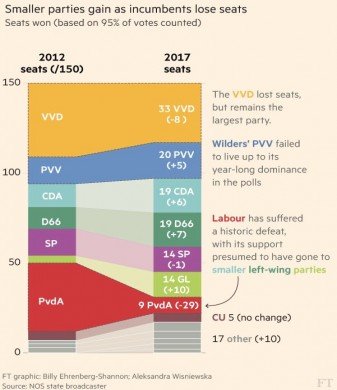 Among the policies of the elected parties, topical issues include: the amount of Syrian refugees entering the Netherlands and their limited rights, battling terrorism/jihadism through passport confiscation, breaching privacy rights to combat cybercrime, increased EU skepticism, and reforms for constitutional inclusivity. However, these policies must observe the rule of law to ensure that citizens’ rights remain protected, to guarantee the compliance of international law, and for the government to function predictably.

Across the elected political parties, there are various observations that can be made with regard to their policies and its compliance, or lack thereof, to the rule of law. Trending topical issues of three major parties – the People’s Party for Freedom (VVD), the Christian Democratic Party (CD), and the Politieke Partij Democraten 66 (D66) – have been examined by the commission “Rule of Law in Election Programs” installed by the Dutch Bar Association to assess how they conform to the rule of law and international law. Their assessment reveals that certain policies of said majority parties do not observe international law and may jeopardize human rights principles.

The proposed policy of the VVD with which they aim to combat terrorism does not comply to the rule of law. The party intends to revoke the Dutch passports of those joining a terrorist organization, regardless of their sentence in court. This conflicts with Dutch citizens’ right to a fair trial. Furthermore, this can render people stateless if the Dutch passport is the single passport they have, which dishonors the 1961 Convention on the Reduction of Statelessness. The VVD acknowledges that this is at risk, and therefore proposes to adjust international agreements so that statelessness can be made permissible. Related to these propositions, the VVD no longer wants the Netherlands to be directly impacted by the resolutions, agreements, and judicial interpretation of human rights. By proposing to reserve themselves from international agreements, they plan to shift further away from international governance, becoming less compliant and less predictable to the rule of law. 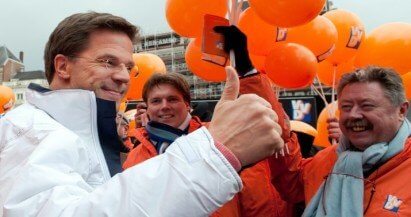 The CDA has won 19 seats in the Parliament. The policies of the CDA with which they approach the status of Syrian refugees raise questions with regard to the way they comply to human rights. This party plans to give refugees the status of Internally Displace Peoples (IDP) and give them temporary shelter. This proposition, however, does not take into account that IDP’s have fewer rights, and that refugees would need to rebuild a residency outside of their war-torn homelands. Secondly, CDA wishes to prohibit foreign financing on the building of mosques and Islamic organizations in the Netherlands. The singling out of only the Islamic faith is a red-flag that signals direct discrimination of Muslims. Thirdly, the party plans to expand police access to digital networks to battle cybercrime, which is an infringement on citizen rights to privacy.