Human rights and conflict – The Hague Conversation on Conflict

The third event in The Hague Conversations on Conflict was held Thursday, 31 October 2019 at The Hague Humanity Hub. Jill Wilkinson, Managing Director Humanity Hub, and Christophe Paulussen, Editor in Chief of the Security and Human Rights Monitor welcomed the audience to the panel discussion on the broad and complex topic of human rights and conflict. Over 75 journalists, civil society actors, diplomats and students were in attendance. Following the panel discussion, a lively and constructive Q&A was held. The event – a collaboration between LINKS Europe, Security and Human Rights Monitor, a platform administered by the NHC, and The Hague Humanity Hub – was moderated by Dr Dennis Sammut, Director at LINKS Europe.

The panel included Dr Nienke van der Have (Senior Legal Specialist at the Dutch Ministry of the Interior and Kingdom Relations  speaking in a personal capacity); Ambassador Piet de Klerk (Chairman of the Netherlands Helsinki Committee, former Ambassador at Large for the Netherlands Ministry of Foreign Affairs); and Fulco van Deventer (Co-founder and Director of Human Security Collective). 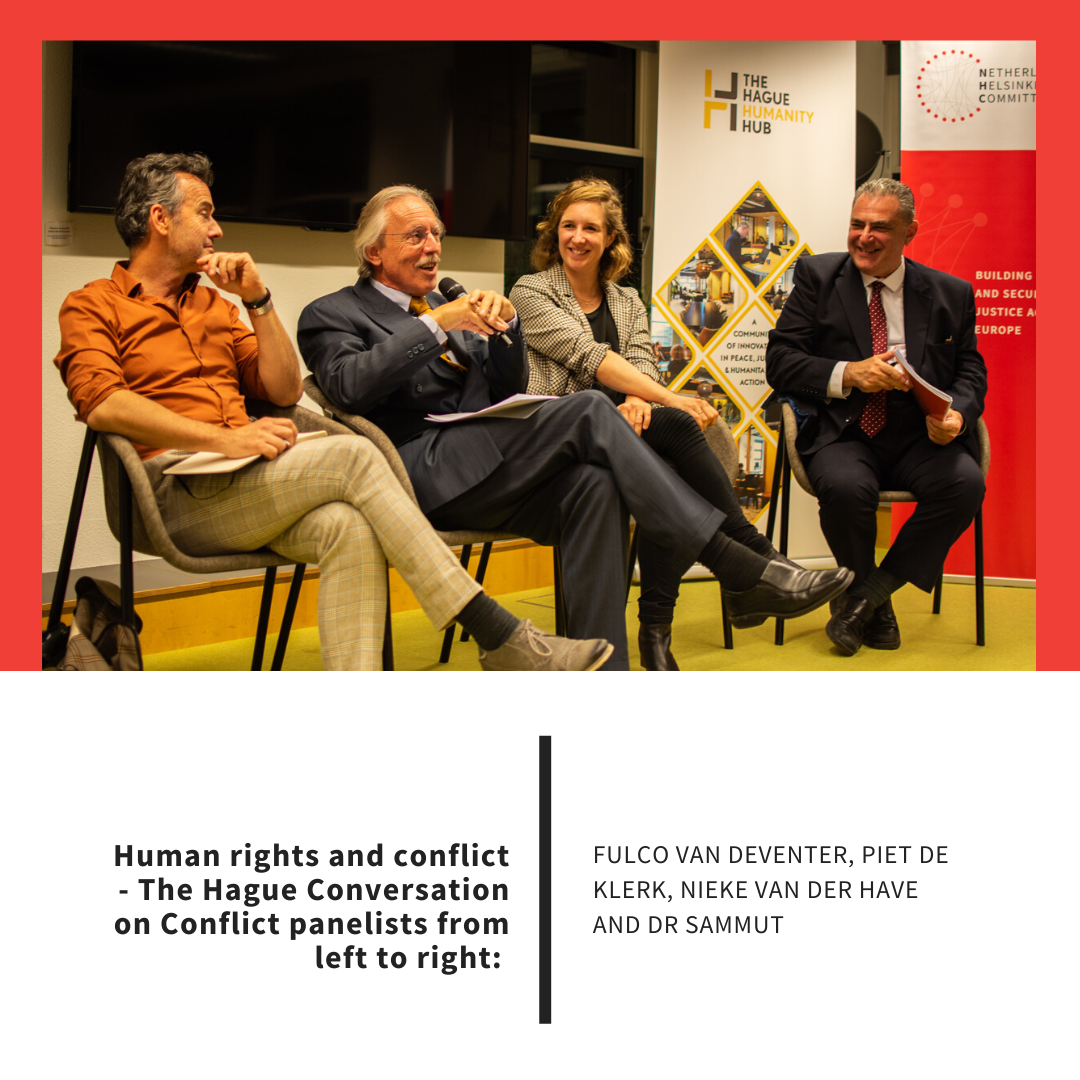 The changing nature of conflict: new challenges for human rights and the international community

The period since the end of the Cold War has seen a dramatic rise in the number of intra-state conflicts, that is sustained conflict between armed groups within one state’s territory. Recent decades have also seen the emergence of non-state actors as increasingly significant players on the global stage, a fact Dr Sammut illustrated with reference to the dramatic and violent rise of the Islamic State. Within the Organisation for Security and Cooperation in Europe (OSCE) area, and thus of particular relevance to the SHRM, Dr Sammut highlighted  ‘frozen’ conflicts – notably in Transnistria, Abkhazia, South Ossetia, Nagorno Karabakh, and the Donbas – as reflective of the complexity of addressing human rights in conflict situations in which traditional boundaries – such as that between state and non-state actors – are increasingly blurred.

These changes in the nature of warfare pose serious questions about how human rights can be protected in situations of conflict, and about the role of human rights in both conflict prevention and resolution. Dr Sammut outlined five key questions for the panellists to explore and elaborate on: 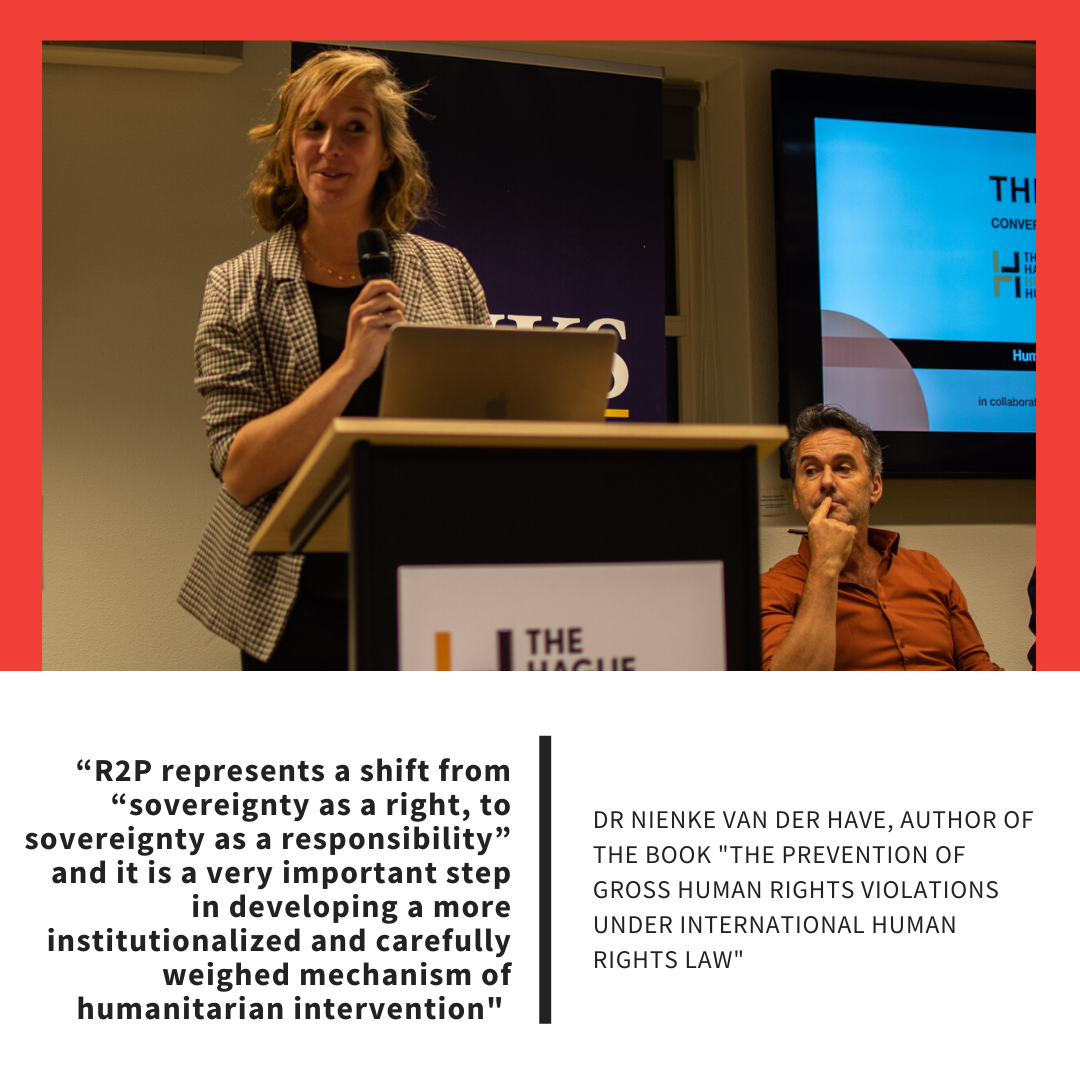 Nienke van der Have, in the first of the speeches from the three panellists, addressed the issue of humanitarian intervention, elaborating on the first two questions outlined above by Dr Sammut. Given her role at the Ministry of the Interior and Kingdom Relations, it is important to note that the views expressed by Dr van der Have during this panel discussion are her own and do not reflect official Ministry positions.

States have clearly defined domestic obligations in relation to the prevention and punishment of gross human rights violations. Under international law, states, in response to human rights violations within their own territories, are required to take a number of actions: from prevention and intervention, to investigation and punishment. These obligations, particularly in relation to genocide, arbitrary death and torture, were the subject of Dr van der Have’s 2017 book, ‘The Prevention of Gross Human Rights Violations Under International Human Rights Laws’.

Sovereign states have committed gross human rights violations against their own citizens but, shielded by sovereignty and a lack of clear obligations of third states, have faced little genuine recourse from the international community. Dr van der Have points however to the 2005 United Nations World Summit’s endorsement of the doctrine of Responsibility to Protect (R2P) as a “very important step” in developing “a more institutionalized and carefully weighed” mechanism of humanitarian intervention. R2P represents a shift from “sovereignty as a right, to sovereignty as a responsibility”. Crucially, the doctrine outlines – at least in theory – a clear basis for extra-territorial humanitarian intervention. Again however, Dr van der Have emphasized that challenges remain despite the existence of a “now more-or-less agreed upon standard for humanitarian intervention”.

Notably, the veto held by the permanent members of the UN Security Council (UNSC) represents a major challenge to the use of R2P and humanitarian intervention more broadly. The use of veto, exemplified by Russia’s and China’s actions in relation to the ongoing Syrian conflict, can lead to political deadlock and the inconsistent application of R2P, followed by claims of humanitarian intervention as a form of liberal neo-imperialism. Dr van der Have, in her concluding remarks, highlighted the recent French proposals which would restrict the use of veto in UNSC discussions on instances of mass atrocity, as a step in the right direction. 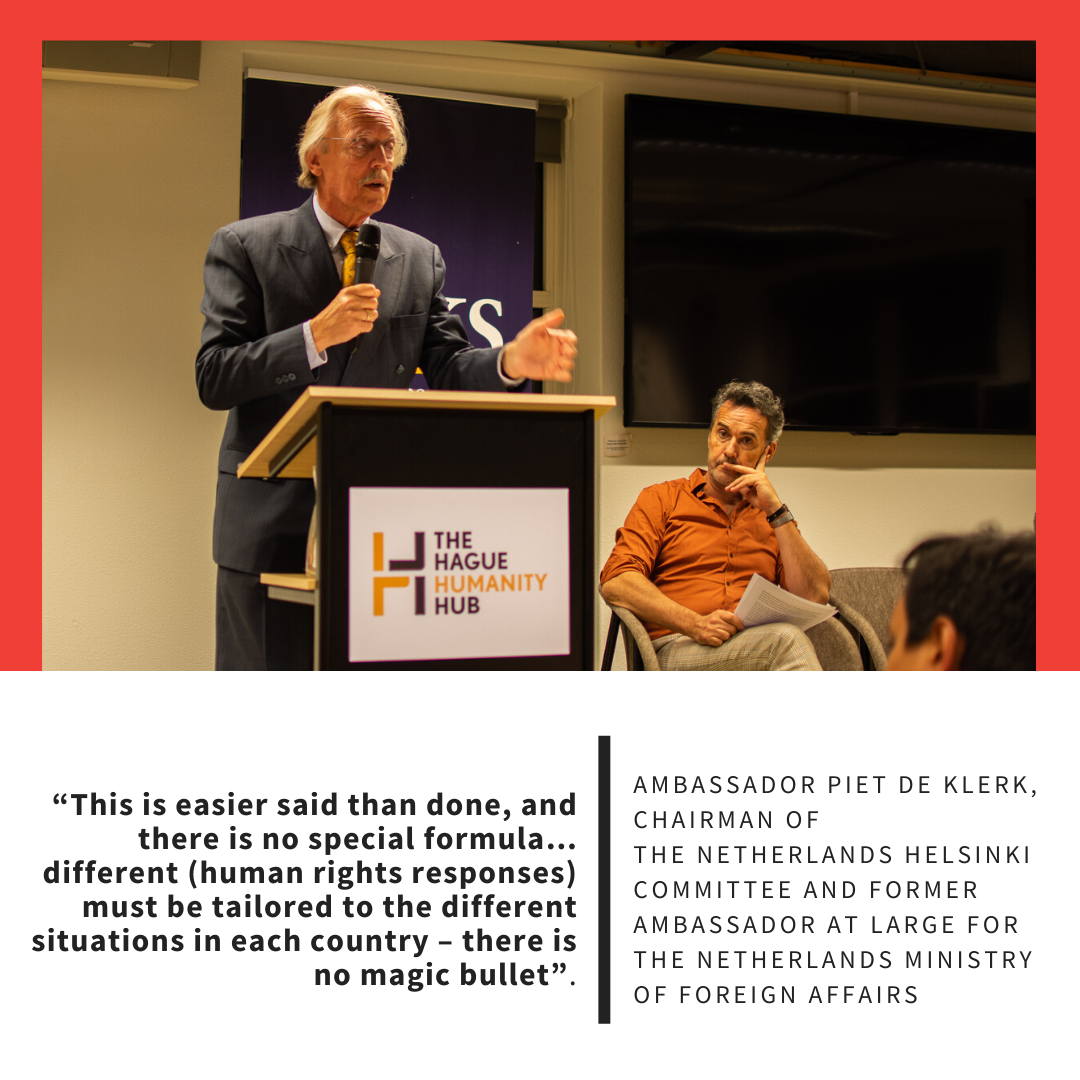 Piet de Klerk drew on his extensive experience in human rights and international diplomacy to explore how human rights can be embedded in conflict resolution and prevention processes to secure the sustainability of peace. Again, like Dr van der Have, de Klerk emphasized that in relation to this question, there are no easy answers. De Klerk opened his remarks by making a clear distinction between conflict prevention and conflict resolution, the latter representing, in his eyes, a more complex challenge for those working in the area of human rights.

De Klerk pointed to Afghanistan, “a country that has known ongoing conflict for decades”, as a clear example of the difficulties of embedding human rights within conflict resolution processes. De Klerk noted that in the mission statement of the United Nations Assistance Mission in Afghanistan (UNAMA), established by the UNSC in 2002, placed an emphasis on improving human rights as part of the broader conflict resolution process. Human rights work in active conflicts however is difficult in practice. De Klerk highlighted that each month Afghanistan sees 2000 or more security instances, with 500-600 resultant deaths. Promoting a human rights culture in such violent and volatile environments is hugely difficult. De Klerk asserted that the role of international human rights actors in situations of conflict should be to assist in the creation of locally driven human rights networks, supporting citizens of the country in question – through capacity building and knowledge sharing –to establish their own human rights culture. In the words of de Klerk, “this is easier said than done, and there is no special formula…different (human rights responses) must be tailored to the different situations in each country – there is no magic bullet”.

Interestingly, de Klerk explored the notion that human rights and conflict resolution processes are sometimes at odds with one another. To illustrate this point, de Klerk pointed to the situation in Northern Uganda from 2004-2006, whereby peace talks with the notorious Lord’s Resistance Army (LRA) broke down after the ICC refused to drop indictments against its leaders in return for a ceasefire. De Klerk concluded that “in many instances you have to get to peace before you can get human rights”. 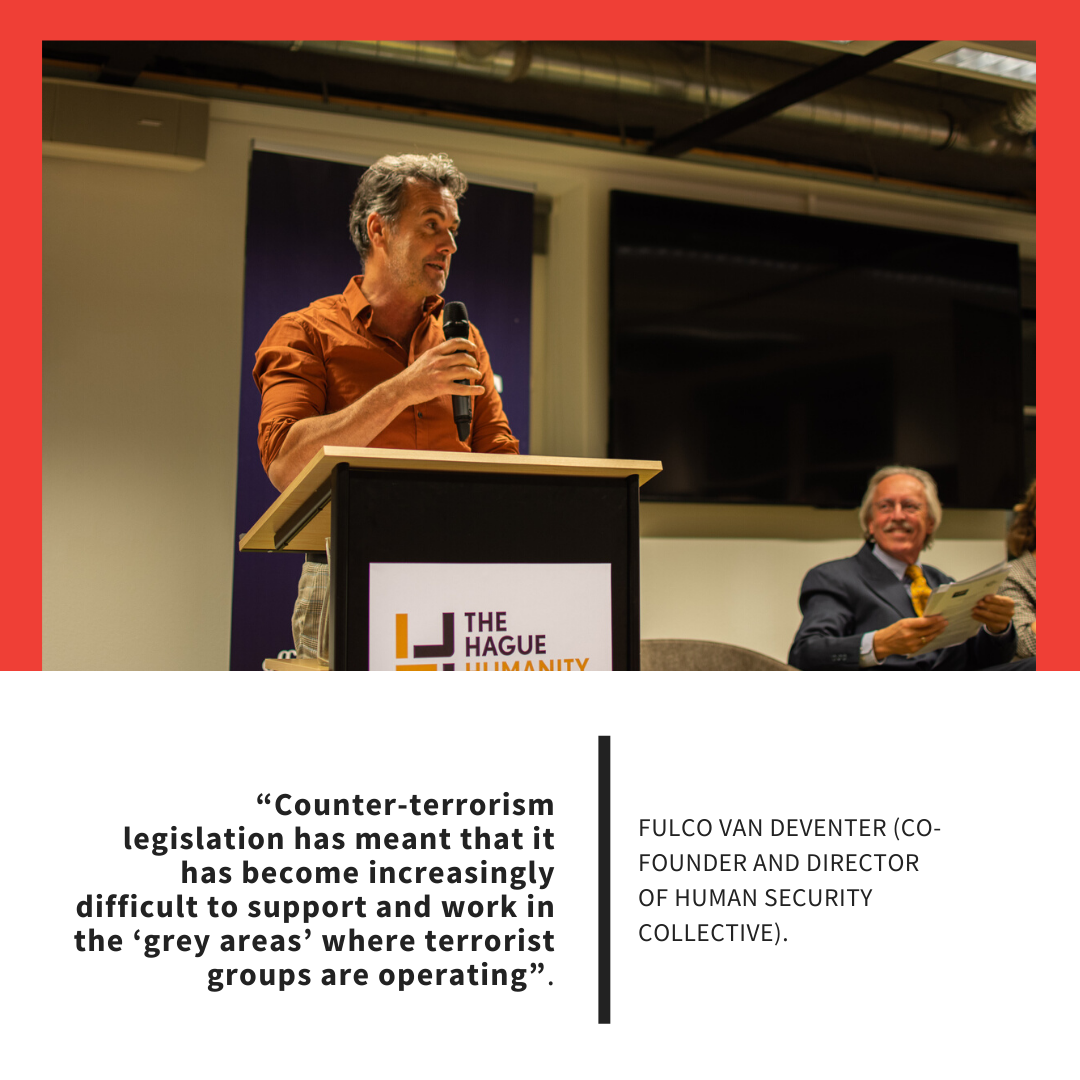 The rise of non-state actors: human rights and human security in the age of counter-terrorism

Fulco van Deventer’s vast experience in the field of counter-terrorism, and in particular in human rights and human security, mean that he was ideally placed to cast light on the last two of the questions outlined by Dr Sammut; what challenges does the rise of non-state actors pose to global human rights protection, and how does the international community engage with extremist groups such as the Islamic State?

Van Deventer opened by highlighting the extraordinary complexity of contemporary conflict dynamics, especially given the rise of non-state actors and intra-state violence. In this context, “we see groups literally squeezed between armed groups on one side, and their own government on the other”. The ongoing conflict in the Ukraine, which has seen civilians caught in the crossfire between Ukrainian forces and Russian-backed militias, is an example of exactly the kind of situation van Deventer refers to. Approaching such situations from a macro perspective, the role of human rights in the contemporary complex is “extremely complex, (and) very difficult to establish”.  However, van Deventer argued that at a local level, the concerns and wishes of individuals and communities affected by conflict and human rights violations are far simpler. People want “the market to be a safe place to go, for their children to be safe and to go to school…that is security in a local situation”. This more localized perspective is reflective of the recognition of human security as an increasingly important concept in conflict situations.

How though do human rights actors engage populations in areas controlled by non-state actors, like the Islamic State, whose violent extremism is the antithesis of modern human rights? Van Deventer argues that human rights work can play a crucial role in countering such violent extremism. The counter-terrorism strategy in the post 9-11 era traditionally centred around the “paradigm of isolation”, whereby radicalized populations are identified, and isolated – physically, socially and financially. However, the growth of human security as a concept in the international arena has seen an evolution in counter-terrorism, as the international community has become increasingly concerned with countering radicalization rather than solely countering existing extremist threats.

Van Deventer argued there is “an increasing interest to address the root causes of conflict and violent extremism”, and in this respect human rights can play a crucial role. Human rights violations – the result of corruption, inequality, conflict oppression – are a central driving force in the recruitment of individuals to violent extremist groups. Van Deventer highlighted the UN Development Programme’s (UNDP) 2017 report, ‘Journey to Extremism in Africa: Drivers, incentives and the tipping point for recruitment’, which concluded that 70% of people who joined terrorist organizations saw human rights violations by their state as a ‘tipping point’ in their recruitment to violent non-state groups.

It is crucial, van Deventer argued, in addressing violent extremism and the increased role of non-state actors in global conflicts, that human rights protection and promotion play a major role in global conflict resolution and prevention processes. Van Deventer noted however that counter-terrorism legislation has meant that it has “become increasingly difficult to support and work in the ‘grey areas’ where terrorist groups are operating”. Human rights actors in areas controlled by non-state actors often face the criminalization of their work. Establishing the role of human rights actors in engaging with violent extremist groups is thus an ongoing and complex challenge. 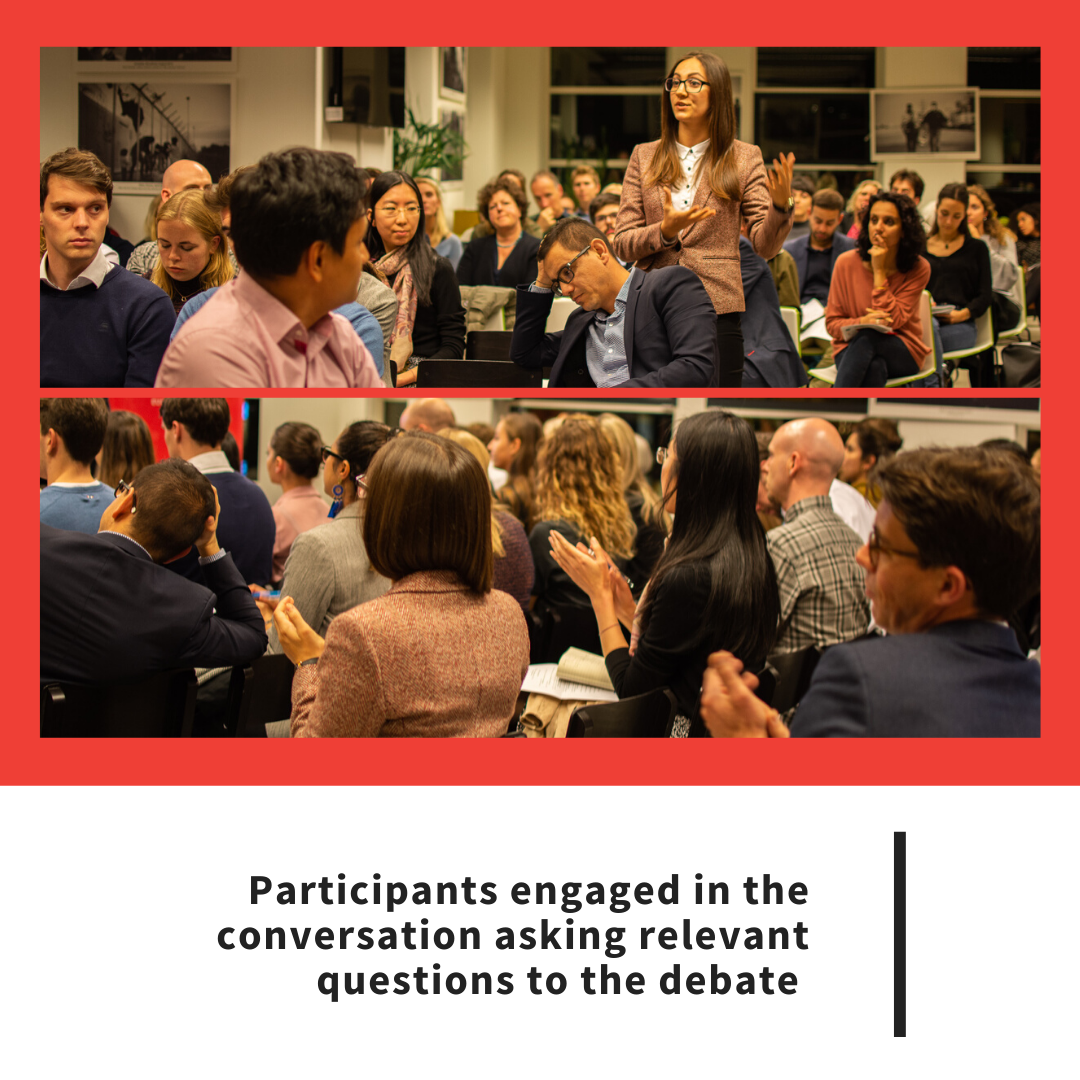 The Hague Conversations on Conflict is a series of discussions, lectures, workshops and networking events launched by LINKS Europe in association with The Hague Humanity Hub, in June 2019. Their aim is to provide a forum where the changing nature of war and conflict can be analysed and assessed, together with the responses of international society. The outcomes of each of the discussions will be turned into a report and disseminated to professionals working in and around conflict issues.

This article was originally published on the Security and Human Rights Monitor website. 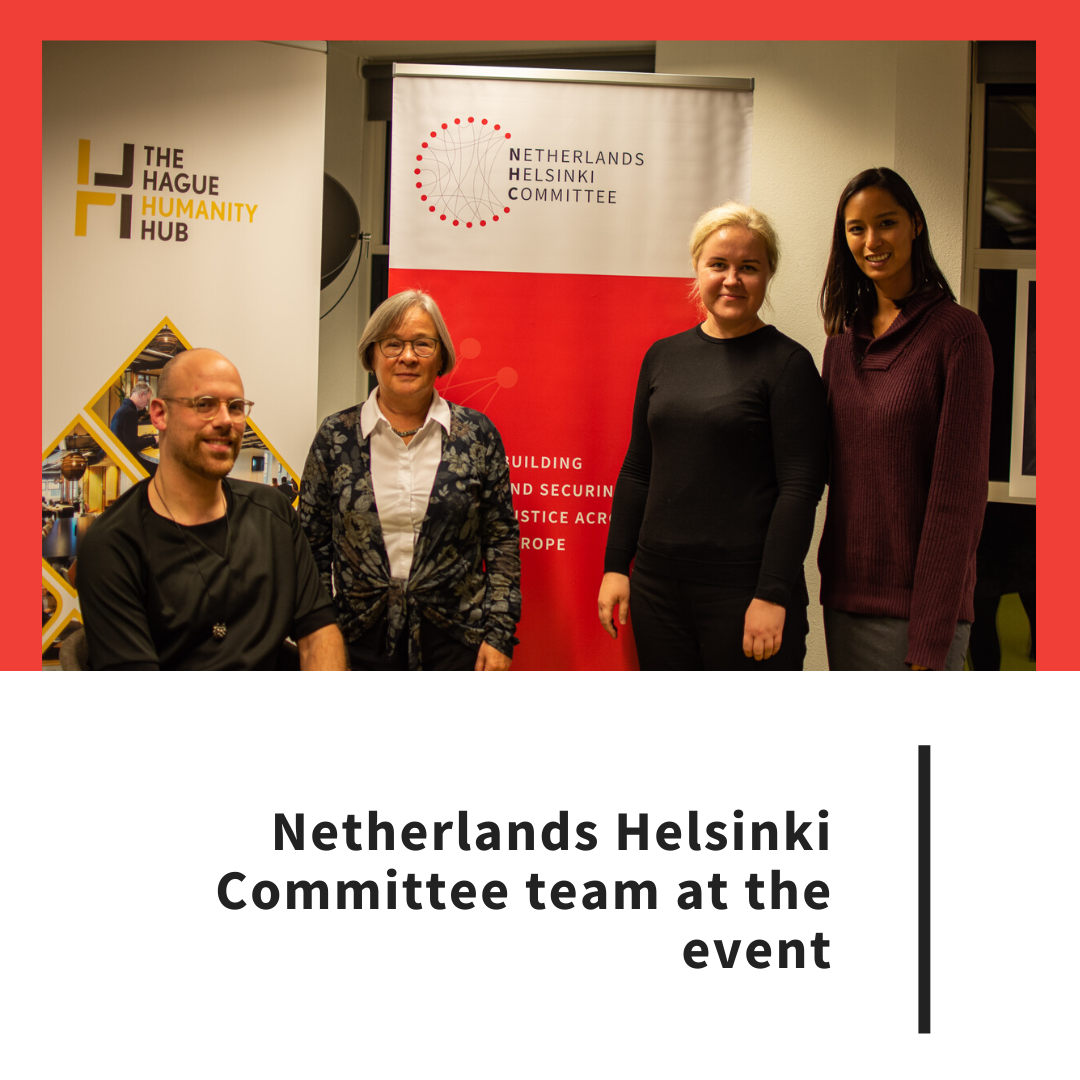