Defending human rights has been an ongoing struggle throughout Turkey’s history. The 2016 coup attempt, which was followed by a two-year state of emergency, resulted in the institutionalisation of the crack down on the work of human rights defenders. This also continued after the state of emergency officially ended in July 2018, and a new authoritarian interpretation of a presidential system was introduced. Today, while the state of emergency and emergency laws have ended, the practices continue. Lawyers, journalists, medical doctors, academics and teachers, civil society activists and many more are subject to threats and judicial harassment. Additionally, human rights defenders’ rights to freedom of assembly and expression are systematically violated.

Turkey was also one of the countries where the human rights record worsened as a result of the government’s response to the COVID-19 pandemic. While several human rights defenders were judicially harassed and targeted by smear campaigns for criticising the government’s response to the pandemic and the resulting further crackdown on civic space, the National Grand Assembly passed new controversial legislation and amendments. All in all, the pandemic effectively worsened an already shrinking democratic space in Turkey.

In the podcast series, “Human Rights Podcast: Freedom of Expression, Freedom of Assembly and Rights Defenders in Turkey” the Association for Monitoring Equal Rights (AMER), the Truth Justice and Memory Center (Hafiza), and the Netherlands Helsinki Committee (NHC), in collaboration with Kısa Dalga Medya, shed light on these trends. The podcast series covers the aforementioned fundamental rights and explores the exercise of these rights in Turkey, while referring to multiple examples.

Listen to our series below!

#1 Caught in a Vicious Circle: Freedom of Assembly in Turkey

In the first episode, moderator Beril Eski and human rights scholar, Umut Orcan, guide listeners through the concept of freedom of assembly and its practice in Turkey. Throughout the conversation, Orcan touches upon issues in Turkish legislation, police violence and the criminalisation of rights defenders. Orcan explains that it is impossible to know what to expect during protects in Turkey, even when completely peaceful. This unpredictability creates a chilling effect for possible participants. Orcan explains that “the main problem with the Turkish legislation is that it does not make a distinction between violent and peaceful protestors.” 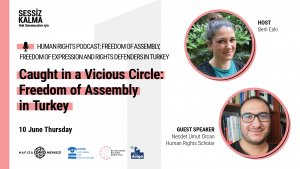 #2 Chilling Effect in Action: Freedom of Expression in Turkey

In the second episode, moderator Beril Eski and academic and co-founder of Freedom of Expression Association (İFÖD), Yaman Akdeniz, guide listeners through the concept of freedom of expression and its practice in Turkey. Akdeniz draws attention to the fact that expressing an opinion has become extremely difficult in Turkey due to the increasing number of prosecutions or investigations started over social media content, even against people who merely like or share posts written by others. He explains that “the internet is the most important battle ground for the government… The government realized that the people are using [it], especially for advocacy purposes.” 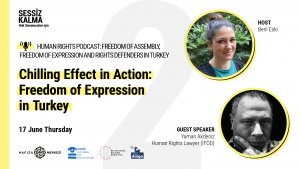 #3 More Pressing Than Ever: Human Rights Defenders in Turkey

In the third and last episode, moderator Beril Eski and Turkey Director of Human Rights Watch, Emma Sinclair-Webb, cover the recent challenges and threats faced by human rights defenders in Turkey. Sinclaire-Webb explains that there is a pattern in Turkey, where the President and senior officials very often publicly speak out about people they dislike, which is followed by some form of prosecution, utilising the label of “terrorist” at every opportunity. She adds: “Yes, it’s the state that is responsible for protecting human rights defenders, and we see all over the world, it is mostly the state that doesn’t protects human rights defenders.” Click below to listen. 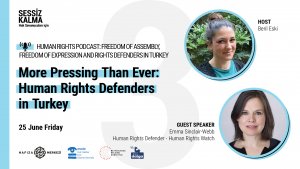 About the Human Rights Defence Programme

We believe safeguarding human rights is the responsibility of all people because everyone benefits from having these rights. Those with the knowledge and courage to defend our rights should be encouraged to do so and supported in their endeavours. They should not be persecuted, tried, nor convicted for championing our fundamental freedoms. The Human Rights Defence Programme works towards broadly spreading the message that human rights are important for everyone in society. This is done in order to increase the public’s support for human rights—and for those that defend them—so their work towards positive changes in society can continue and everyone can live in a more peaceful and just world.