The first was given by two staff members of the Ministry of Justice of Ukraine; Mr. Oleg Yanchuk, Director of the Department of Probation, and Mrs. Kateryna Novokhatnia, Head of the Probation Project Management Office.

During their presentation, they informed the audience about the ongoing reforms of the probation system in their country, which began with the adoption of the Law on Probation in 2015. In accordance with a carefully designed roadmap (which is the result of an impressively thorough needs analysis, an inventory of best practices in probation and a smart assessment of capacity building capacities of different donor countries) the probation system, with the help of selected international partners, will continue to be developed in the years to come.

The Netherlands is one of several countries which aims to assist Ukraine in this reform. In 2017 the Dutch Ministry of Foreign affairs decided to fund the project ‘Probation and alternative sanctions in Ukraine’, developed by the Center for International Legal Cooperation (CILC) and the NHC. This project is currently based in the Kievskaya Oblast and is set to last until June 2021. 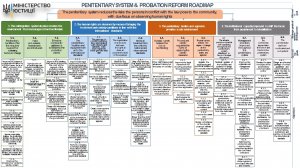 Mrs. Novokhatnia praised the Netherlands for its results-based method of working which includes flexibility, extensive preliminary analysis, small-scale approaches and facilitating peer-to-peer exchanges of experiences. However, she also highlighted several issues which should be taken into consideration by international project partners. She encouraged the partners to take note of the size of a country, to be aware of local differences and to take into account public opinion surrounding probation. In addition to this, she urged the CILC and the NHC to be mindful of the limited capacity of the probation service, as well as to try and prevent the perception of certain activities as a burden due to the fact that this part of the government is already overcharged with work. Lastly, she stressed that current activities in international cooperation should not intervene with earlier executed activities by other donors, and that the duplication of activities of other international partners in the region should be avoided.

In the second presentation, two staff members of the Dutch Probation Service, who have been involved in many international capacity building projects, shared their experiences with the audience. Mr. Frans Clobus (Probation Officer/Social Worker) and Mr. Jochum Wildeman (Unit Manager) stressed the importance of being sensitive of ‘different realities’ in a dynamic dialogue. During a project, foreign experts should gain knowledge of local laws and local differences . Furthermore, they should respect local customs and practices.

By referring to project beneficiaries as ‘colleagues’, they tacitly demonstrated their perception of the other party. They informed the audience that they learnt a lot from their colleagues; knowledge that is valuable for reflection on the Dutch probation service.

They also mentioned the importance of being aware of different learning styles when passing on knowledge and skills to international colleagues. As Mr. Wildeman stressed: ‘Don’t copy the Dutch system, but discuss which elements you can apply ’. It is possible that other work environments differ from the Dutch setting. This has to be taken into consideration when implementing certain activities. According to Mr. Wildeman and Mr. Clobus, one of the most important lessons learnt is to be flexible and to be patient; ’Sometimes you need time to step back from a project’s framework and look at what is really going on.’ 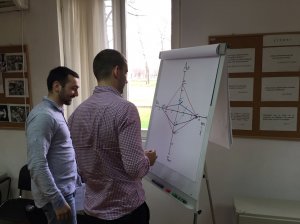 In the final presentation of the workshop, Mr. Willem van der Brugge, Secretary General of the European professional organization for the probation sector CEP, put the Dutch approach into a broader European perspective. According to Mr. Van der Brugge, Dutch capacity building is marked by the fact that it has had a probation system since the late 1800s and therefore has a mature probation service which is an accepted actor in the criminal justice system. Another forte is that the Dutch generally prefer to engage probation practitioners as trainers, rather than as managers or directors. The Dutch no-nonsense attitude and often very direct way of communicating may be a real asset in achieving project goals.

However, Mr. Van der Brugge also touched upon areas where the Dutch capacity building could be improved. While working with international partners, taking a more modest demeanour would be advisable, he stated. Moreover, in times where probation work is done more and more from behind computers, ‘the Dutch’ should not forget that probation is most effective when communicating face-to-face to the individuals involved (such as offenders, their family, judges and prosecutors etc.). Lastly, Mr Van der Brugge noted that the Dutch tend to focus on avoiding risks, which sometimes makes them blind to other very viable solutions or alternatives.

The observations of the presenters not only contributed to the original purpose of the conference to assess how beneficiaries appreciate the Dutch capacity building in the realm of justice, but also came at a very timely moment for CILC and the NHC. Apart from the probation project in Ukraine, the two organisations simultaneously conduct a probation project in Serbia and Montenegro, financed by the Dutch Ministry of Foreign Affairs. Both organisations will take all suggestions on board in the execution of the two projects.

During the conference, the Minister of Justice and Security, Ferdinand Grapperhaus, launched an online database of international capacity building projects targeting the reinforcement of the Rule of Law, in which the Dutch government is involved. The projects, which are depicted on a world map, can be found here.