On 4 December, the Dutch Minister of Foreign Affairs held the traditional discussion with human rights defenders during the OSCE Ministerial Council. The topic of the meeting was corruption and its impact on human rights, set around the Tirana Declaration on Human Rights, Democracy and the Fight against Corruption issued by the Civic Solidarity Platform (for which the NHC chairs the Secretariat), ahead of the OSCE Ministerial Council meeting of 2020. 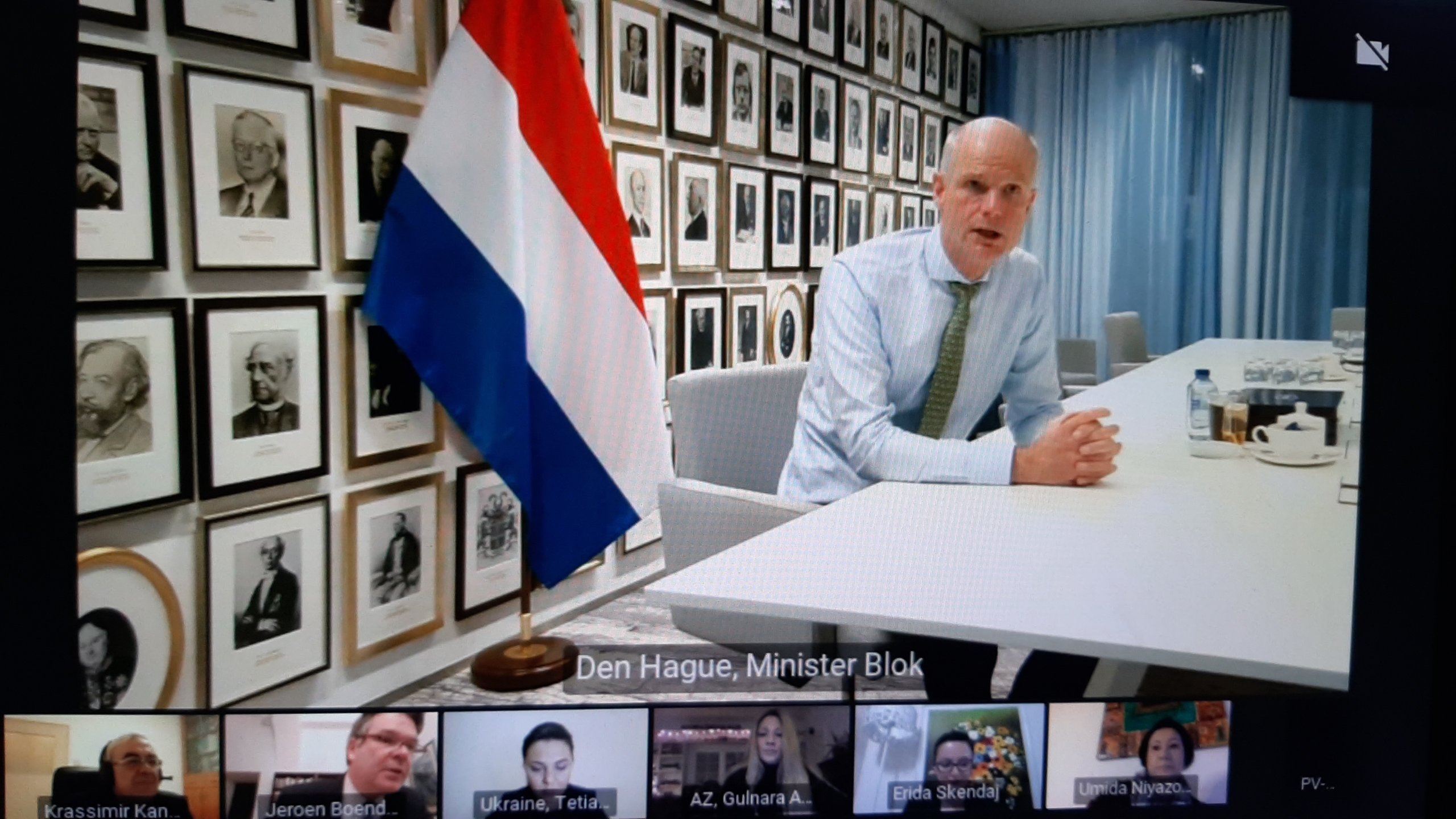 The major challenge to the fight against corruption in countries where it has become a concern could very well be put by the Dutch proverb: “if you want to clean the stairs, you have to start from the top” – Erida Skëndaj, Executive Director Albanian Helsinki Committee

On 04 December, during the OSCE Ministerial Council, Minister Blok heard from human rights defenders (HRDs) from Albania, Azerbaijan, Bulgaria, Ukraine and Uzbekistan on what corruption implies and how it aggravates human rights abuses in their respective countries. The HRDs explained how civil society actors advocate for the creation of legal and institutional frameworks to counter corruption. Having heard each HRDs story, Minister Blok emphasized the importance of civil society action to uncover corruption, assist victims of corruption and monitor the implementation of anti-corruption policies. The human rights defenders commended the active interest in human rights of Dutch embassies in their respective countries, and pleaded to extend the mission network to countries currently not covered.

The theme for the meeting was derived from the Tirana Declaration on Human Rights, Democracy and the Fight against Corruption, issued by the Civic Solidarity Platform ahead of the OSCE Ministerial Council meeting of 2020. Every year, Civic Solidary Platform issues such a Declaration on a subject that merits enhanced attention. This year’s theme was corruption. Anti-corruption activists and investigative journalists are subject to harassment, legal procedures and criminal prosecution in many countries. This harassment can go as far as suffering from attacks on their body and life. Monitoring of the persecution of human rights defenders in Ukraine, for example, shows that people fighting corruption are one the most endangered categories. The story of Kateryna Handziuk highlights the threat that those fighting corruption face. Handziuk was an activist who had sulphuric acid thrown at her near her house in 2018. Four months after the attack, she died in the hospital as a result of the burns she sustained from the attack.

The Tirana Declaration notes that corruption is in many ways linked to human rights abuses. Those that are socio-economically disadvantaged, that belong to marginalized ethnic groups, and that are discriminated against because of their gender, age, or disability, are disproportionately vulnerable to suffer from corruption-related human rights abuses. On the other hand, the perpetrators of corruption seek out anonymity and want to prevent becoming subject to public scrutiny and legal procedures. Consequently, they will try to control the media, the courts, and the election system to ensure this anonymity.

The Tirana Declaration calls on states to step up the fight against corrupt interests capturing states around the world. Both corruption and the money flows that come from it should be tackled more forcefully. The OSCE and OSCE bodies should stimulate increased and strengthened steps for the confiscation abroad of corruptly obtained assets and for their return to the populations they were stolen from. This will both contribute to covering the basic social needs of these populations and to taking into account the importance of preventing renewed corrupt appropriation of the funds.

The Netherlands Helsinki Committee thanks Foreign Minister Stef Blok and Dutch Ambassador to the OSCE Jeroen Boender for their time and involvement, and our colleagues in Albania, Azerbaijan, Bulgaria, Ukraine, and Uzbekistan for their participation!