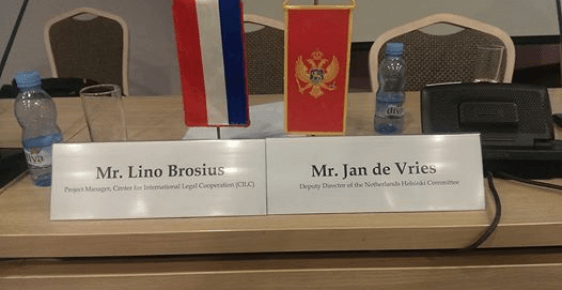 On Wednesday 8 October, the Netherlands Helsinki Committee and CILC presented the results so far of the project on probation and alternative sanctions they are jointly implementing in Montenegro. This was done at an event in Podgorica to mark the mid-term of the project. Ms Slavica Rabrenovic of the Ministry of Justice and Deputy Head of Mission of the Netherlands Embassy to Serbia and Montenegro Ms Dominique Kühling addressed representatives of project stakeholders, including the judiciary, the prosecution service and several municipalities. The project is funded by the Dutch Ministry of Foreign Affairs through its Matra/CoPROL funding scheme.

Lino Brosius of CILC and Jan de Vries of the NHC gave presentations about the project, its background and rationale. Probation officer at the Dutch Probation Service Frans Clobus presented some of the tangible results of the project so far. Clobus has been involved in setting up the Montenegrin Probation Service and enhancing the capacities of its officers, first as part of a Twinning Project (Support to Penitentiary Reform in Montenegro) and now within the context of the current project. Rutger Wery, Justice at the Court of Appeal in the District Arnhem/Leeuwarden, shared his experiences as a judge in The Netherlands working with the Dutch Probation Service. He indicated amongst others: “I feel I could not do my work as a judge, rendering justice, without the involvement of the Probation Service. The service provides me with the essential information I need to render justice and I fully rely on them to supervise the sentence.” Judges and prosecutors in the audience indicated that they are very positive about conditional sentences and community service sentences and are already imposing and demanding them. However, in order for them to continue doing so, they stressed that they must be sure that there is a service that can supervise these sentences.

CILC’s Lino Brosius added: “All signs are green now to expand the work of the probation service in Montenegro. It is reassuring to see that all stakeholders necessary to make the system work reaffirmed their commitment to work towards our common goal.” Jan de Vries confirmed this: “Good work has been done. Everything is in place and we are in a crucial phase now, a tipping point. If there are enough full-time probation officers now we can start achieving great results very quickly.”

One of the next steps in the project is the circulation among Montenegrin judges and prosecutors of a survey focusing on the experiences of these professionals with alternative sanctions and the Montenegrin Probation Service. This survey will further structure joint Dutch-Montenegrin working meetings and it will provide a baseline against which progress in the project’s implemention can be measured. This is the first time such a survey is held among all judges in Montenegro.

The project Support to the Probation Service and the System for Alternative Sanctions in Montenegro is funded through the Matra/CoPROL funding scheme of the Dutch Ministry of Foreign Affairs. It started on January 1, 2014 and will run for 2 years. The project is a cooperation between NHC and CILC together with the Dutch Probation Service and a number of Dutch judges and prosecutors. The project’s total budget is €807.000.