Recap | Systemic Backsliding of the Rule of Law in Hungary: What (more) can the EU do?

On April 19 2022 the NHC hosted an event at the Press Club in Brussels with 4 distinct Hungarian academics to present the findings[1] of a series of academic papers from leading Hungarian leading scholars.[2] The academic papers (click here) presented a comprehensive analysis of the steady decline of democracy, fundamental rights and Rule of Law in Hungary since the start of Orbán’s regime. From a European Union perspective, the academics stressed the systemic nature of this situation and urged for more impactful actions from EU institutions. This article presents a short recap of the event’s main statements and interventions. Watch the full conference here, or check an overview of the themes of the papers here.

1) Petra Bárd – Hungary in light of the EU rule of law toolkit, fake compliance and room for maneuver

In a first intervention Dr. Bárd explains what has been happening in Hungary since Orbán entered into power 12 years ago. Orbán seems to have ideated a blueprint that aims to weaken and eventually eliminate checks and balances to the executive power, disguising this under a veneer of legality, that sustains that all actions are technically embedded in Hungarian constitutional regulations, through liberal interpretations of its articles and principles.

Interested to know more about the milestones that lead to the consolidation of Orbán’s unchecked power? See: https://www.nhc.nl/systematic-backsliding-of-the-rule-of-law-in-hungary-explored-through-academic-research/

Dr. Bárd claims that this is not a matter only constrained to Hungary. This systematic backsliding has happened under the vigilance of EU institutions which, among other effects, can have serious consequences for the legitimacy of the EU project, due to its spillover influence onto these higher bodies. As an illustrative example, the lack of transparency in Hungarian elections also questions the fairness of the process in which Hungarian candidates for the European Parliament are appointed, while these elected representatives have the power to decide on matters that can affect the Union as a whole.

The EU possesses the necessary toolkit to face this situation, but these mechanisms have been heavily underused, as processes that aim to correct these developments have been delayed for too long. Dr. Bárd affirms that dialogue and compromises, which have been at the core of the EU’s strategy, only work if dealing with a democratic regime, a condition that does not apply to Hungary anymore. Using the same procedures in non-democracies only entrenches autocracies and allows for the further capture of power. As a last statement, Dr. Bárd emphasized that “The EU must walk the talk and indeed play a pioneering role when it comes to the defense of the Rule of Law. (…) The tools are there so I think the European Union could at least slow down if not contain the Rule of Law backsliding, but at the very minimum put an end to the absurdity of financing regimes in violation of EU values.”

The systematic dismantling of rule of law has also had profound social consequences in Hungary. Nearly every institution has been put at the service of the central power and only one vision of the world has been allowed to exist, an effect that has penetrated into Hungarian culture. From a sociological standpoint, Dr. Fleck enumerates a list of consequences in this field, ranging from the betrayal of professional values, as well as the effects that the lack of observable functioning institutions and politics has on younger generations.

Alongside this, Dr. Fleck analyses how Orbán long-standing regime has changed how the Hungarian society operates, highlighting the revival of survival techniques from communist times, among citizens. With a weakened pluralism, this negatively affects solidarity and tolerance in society and indicates that a swift return to pre-Orbán conditions is doubtful. The ruling vision has already had deep effects on citizens and shaped how society behaves in Hungary. Dr Fleck affirms that: “The regime’s ideological hostility to the idea of open society will inevitably lead to further closure of Hungarian society”

3) Anita Koncsik – Capturing the judiciary and its jurisprudence

In her intervention, Dr. Anita Koncsik reflects on the systemic capture of the judiciary branch, and highlights how this steady process has had broad effects in maintaining power centered in the figure of Orbán while slowly enabling the disintegration of the checks and balances to central power provided by the judicial branch. Dr. Koncsik analyzes five milestones that have paved the way for this capture to be successful: the development of an Executive-friendly Constitutional Court, the presence of weak judicial self-representation, the creation of a tailor-made legislation, the capture of the minds of judges via jurisprudence and the use and abuse of the concept of the apolitical judge are among the most relevant tactics displayed by Orbán in the last 12 years of uninterrupted ruling.

Orbán is currently pursuing a Rule BY Law alternative to governance. Want to know what this means? See: https://www.nhc.nl/systematic-backsliding-of-the-rule-of-law-in-hungary-rule-by-law/

Dr. Koncsik presents examples on how these development have contributed to shape the functioning and alignment of the judicial branch.. Furthermore, the introduction of an omnibus bill in 2011 made the court system more hierarchical and centralized, and is now able to reject any verdict that goes against the concept of ‘’mainstream jurisprudence’’, conveniently introduced and developed by Orbán loyal judicial representatives.

Regarding the EU’s role in this situation, Dr. Koncsik also coincides with her colleagues in the need for further action from these institutions: “There is an enormous Fidezs majority in the parliament, every measure therefore can be depicted as a constitutional reform in Hungary, that is why the highly legalist approach to rule of law is misleading and is a gift for autocrats that operate on the veneer of emptied out legality and legal formalism. International stakeholders also share the responsibility to stop legitimizing actions and fake dialogue via letting excessive relativism taking over”.

In this last intervention, Dr. Körtvélyesi reflects upon how Hungarian society, after years of continuous attacks to its most basic rights, can reelect Orbán for a fourth consecutive time. Dr. Körtvélyesi claims that the root of this context lays in the long-term presence of unconstrained power in the hands of the Executive. This situation has allowed Orbán to influence all Hungarian institutions and shape their decision-making to his convenience. In the electoral realm, the constant change in conditions has deeply disadvantaged the opposition, preventing it from conducting a successful campaign against Fidezs.

An authoritarian government can have lasting social effects. Learn more about Orbán’s capture of media, academia and civil society: https://www.nhc.nl/systemic-backsliding-of-the-rule-of-law-in-hungary-state-control/

Regarding the capture of media, Dr. Körtvélyesi states that the saturation of government messages in Hungarian media outlets has reached critical levels. Government friendly messages are constantly aired by television and radio and published in newspapers and social media platforms. Orbán efforts to push one single version of reality upon Hungarian society has materialized in the closure of independent media outlets and the continuous dissemination of mandatory messages, which has shaped Hungarian citizens beliefs and preferences.

Similar tactics have been designed to constrain the work of academics, NGO’s and other civil society representatives. This has harmed academic freedom and the ability of NGO’s to incite upon Hungarian reality, while leaving the ideas pushed by the regime to gain influence in the Hungarian social context.

As a last remark, Dr. Körtvélyesi delves into the developing of Hungary as a rentier State based on the provision of EU funds, pointing at the EU as partially responsible for facilitating the permanence of Orbán’s in power and emphasizing the need for a change in strategy when dealing with Hungary’s Rule of Law backsliding. He argues that: “This is an annual Marshall Plan channeled into the hands of the government so it’s really hard to imagine this regime having been built without EU funds, so you might realize from all of the above that small concessions from the regime in exchange for going back to normal in terms of EU funding will only strengthen the regime and its undesired effects on the Rule of Law, human rights and democracy”

Orbán and Fidezs have achieved the capture of nearly every aspect of Hungarian society. From institutions, to laws, media and academia, Hungarian civic space is shrinking at alarming rates, and this can have effects much further than the Hungarian frontiers. The Rule of Law backsliding happening in Hungary needs to be recognized as a European Union matter and the appropriate mechanisms must be urgently triggered in order to stop the systematic democratic dismantling that has been too long in the making.

List of papers (you can find all the papers here: https://jog.tk.hu/en/mtalwp) 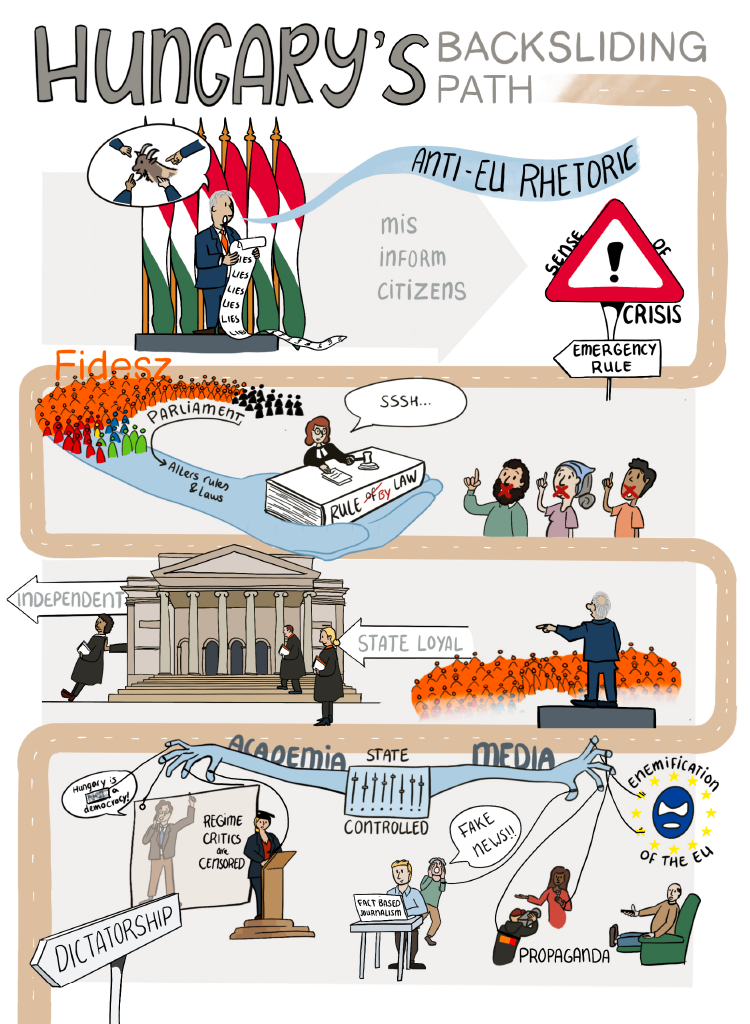