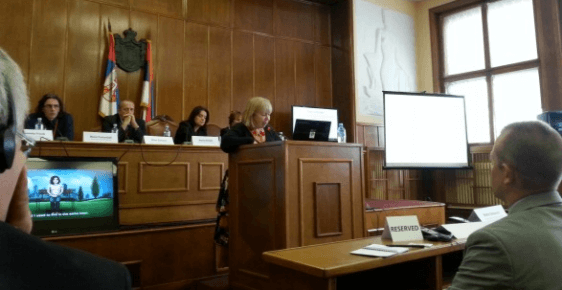 On 17 and 18 October, the regional Conference “Access to the right to compensation for victims of human trafficking in the region“, was organized by ASTRA Anti-Trafficking Action from Serbia and its partners from the region, France and the Netherlands. The event was held in Belgrade in the small hall of the National Assembly of the Republic of Serbia.

On the eve of the European Day Against Human Trafficking, the participants were welcomed by Kristin Moro, Ambassador of France, Laurent L. Stokvis, Ambassador of the Netherlands, an European Commission representative and Mitar Đurašković, Coordinator for Combating Trafficking in Human Beings of the Republic of Serbia.

Speakers presented different practices of regulating access to the right to compensation for victims of human trafficking, as well as the existing legal framework in which this right would have to be realized. Dutch and French lawyers and representatives from the state Compensation Funds from France and the Netherlands presented examples of practices that could serve as recommendations for Serbia and other countries in the region where a legal and institutional framework and systematic measures for the access of victims to compensation are yet to be realized.

“Human trafficking is a global problem that is not bounded by national borders”, said ambassador Stokvis. He stated that joint effort from civil society organizations and states are necessary in the fight against human trafficking. Stokvis emphasized the long-standing support the Government of the Netherlands in combating all forms of “modern slavery”. Kristin Moro, the Ambassador of France in Serbia, stated that “to France, giving support to victims of human trafficking and serious crime is a priority in the fight against human trafficking. She also believes that cooperation between the state and civil society organizations is essential in this fight.

Prosecutors, judges, and lawyers from both the South Eastern Europe region and from France and the Netherlands, discussed the challenges in this area, as well as strategies and solutions for the realization of compensation for victims of human trafficking and to overcome existing problems. French lawyer Anne Bouilon said, that in France, until recently, the perpetrator was the one who got all the attention. According to Bouilon, fortunately, this has changed and the victim is now more at the center of interest.

Dutch lawyer Annet Koopsen, a well-known lawyer in trafficking cases, defending the rights of victims of trafficking as witnesses, presented successful examples from the Dutch practice in criminal proceedings where the victims were awarded with relative large amounts of compensation compared to other countries in Europe.

Dutch judge and chairman of the Committee of the National Fund for Compensation of Victims of Violent Crimes (Schadefonds Geweldsmisdrijven), mr. Ludo Goossens, explained how the Dutch Fund works and presented the changes of the past few years. The Fund is working more and more with a citizen-centered approach. Where with other forms of exploitation, the victim must prove that he/she is suffering from a serious injury, since 2012, it is assumed by the Fund that serious injury is automatically a consequence to sexual exploitation. According to Goossens defining a case as human trafficking and recognizing a victim as a human trafficking victim, is a bottleneck. It is important that there is enough evidence that someone is a victim of trafficking in cases that a trafficker does not get convicted. In the Netherlands, a statement by the prosecutor or the police saying that the victim is a victim of trafficking, is regarded substantial supporting evidence by the Compensation Fund, despite an unsuccessful criminal investigation.

Serbia and the region

There is a noticeable shift in the last few years in the region and the states have shown a strong commitment to developing its legal and institutional framework in order to improve the environment of the victims, especially those who have experienced violence, abuse or discrimination.

However, despite having signed and ratified important international conventions – conventions of the United Nations and the Council of Europe which deal specifically with the protection of victims of trafficking, to the recently adopted Council of Europe Convention on preventing and combating violence against women and domestic violence – it seems that state institutions do not invest enough effort and create insufficiently harmonized policies.

Please find here the summary and conclusions of the conference, written by Anti-Trafficking and Human Rights expert from the Netherlands, ms. Marjan Wijers, who participated to the Conference on behalf of the Netherlands Helsinki Committee. This project is supported by the European Union.