Human Rights belong to us all

The message that human rights belong to everybody took front stage during this summer’s online launch of the NHC’s #BringHumanRightsHome campaign. The importance of this poignant message became increasingly clear throughout the event, as three of the campaign videos – set in Hungary, Ukraine and the Netherlands – were presented and acted as food for the ‘Conversations on human rights and why they matter’. From hate speech and outright violence towards the Roma community in Hungary, to the use of AI to detect fraud in lower income communities in the Netherlands, it became clear that the defence of human rights is never finished. However, what also shone through these stories was that human rights belong to us all, and can be defended by anyone and everyone. The main protagonists of these stories were ordinary people who stood up for what they believed in, and won, leaning itself to the age-old David and Goliath story.

“Human rights are at the core of what makes us human,” – Jelle Brandt Corstius, Dutch Journalist and former Russia foreign correspondent.

The event was moderated by Jelle Brandt Corstius, and introduced by Pepijn Gerrits, Executive Director of the Netherlands Helsinki Committee. Gerrits emphasised the importance of collaboration in human rights defence, stating that:

We hope that through sharing the stories of courageous people from eight different countries who stood up for their rights in the face of adversity, we can return to the core of what human rights mean for all of us, and what is needed to #bringhumanrightshome.

Human Rights in a European context

Caroline de Gruyter, journalist and expert on European politics and history joined us as keynote speaker, relaying the evolution of human rights in Europe. “Many of us think that it’s always been one of the core businesses that we’ve been doing in the European Union” however, this is only a recent development stated de Gruyter, as whilst for decades we have lived by European values, they were not spelled out until very recently. It was via the backdoor that definitions of rule of law and human rights were brought into the Europe Union in the first place. The “zeitgeist” being the Helsinki Act of 1975, the laws of which the NHC continuously works to uphold. In the end, it was a conglomeration of pressures led to the creation of the charter of human rights and appeared in the Lisbon treaty in 2009. Despite this, upholding human rights in the EU is an uphill battle, illustrated by the attempts of some member states to for instance, reintegrate the death penalty or clip the wings of journalists.

#BringHumanRightsHome: Stories from the Netherlands, Hungary and Ukraine

Despite these challenges, Kirsten Meersschaert, our first panelist from the Netherlands Helsinki Committee, took solace and “found hope in the manifestations of protests.” Where even in the throes of the COVID-19 pandemic people found ways in which to come together and make their voices heard. With regard to EU institutions, the reality of the human rights situation remains a one step forward, two step backs process, but “people are there to have their voices heard,” inspiring hope. Alongside Meersschaert we were joined on the panel by Anikó Bakonyi from the Hungarian Helsinki Committee and Tetiana Pechonchyk from the Human Rights Centre ZMINA.

Following the viewing of the campaign  videos, the panelists relayed to us the impact of the campaigns. Pechonchyk explained that after the campaign in Ukraine, local activists started to gain more traction and a greater importance was placed on the local level, highlighted by the fact that budgetary decisions started to be made on a more local level. When speaking about the story from Hungary, Bakonyi shared that Norbert Dömötör – one of the Roma activists – is still “active in protecting his own community” and the money that they received as compensation from the European Court of Human Rights after five years was used to help the community. The Hungarian story illustrates both the importance of activism on a local level, as well as the that of human rights in everyone’s lives:

“It [human rights defence] is not just a job, it’s something everyone can do.” – Anikó Bakonyi, Hungarian Helsinki Committee

Being a human rights defender, what does it take?

The event was interspersed with questions posed to and from the audience; one of the latter being: After hearing all these stories, do you think you can be a human rights defender? Brandt Cortius encouraged the audience to give an honest answer; see the results of the poll below: 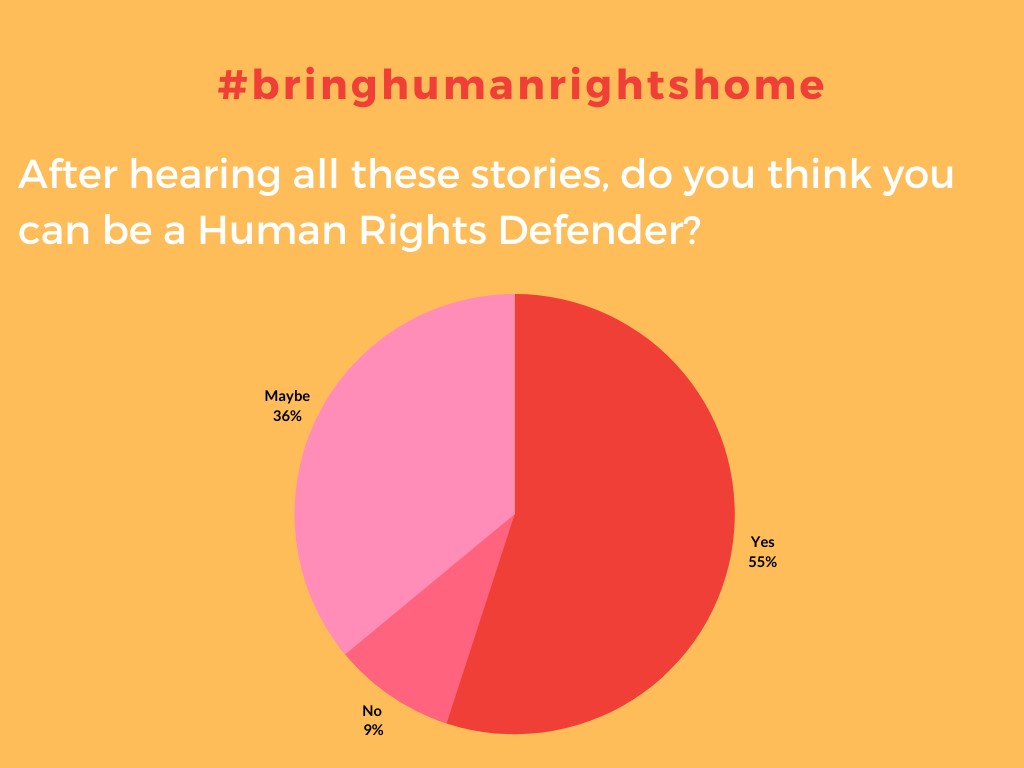 What would your answer be? Watch the stories and decide for yourself.

What would be your tip for someone starting off in human rights? was one of the questions posed to the panelists during the Q&A. Meersschaert was the first to respond, emphasising that we can all “start small, start local, do something for your community.” The power of small actions was clear throughout, bringing the message home: Human Rights are for everyone.  Pechonchyk referred to using social media channels raise awareness, where something as simple as a Tweet or a Facebook post can make a difference. Pechonchyk also highlighted volunteering with a human rights organisation and work within a team that is already working on the issue you would like to address as channels to raise awareness. “Start with something that you know about and care about” was the tip offered by Bakonyi, echoing what Meersschaert said, start local. Bokonyi also emphasised that local can also mean your family or friends, “don’t remain silent, when you see that something is not according to the way that you think it should be,” stand up and use your voice, and “then you can indeed use the channels outlined” to reach a greater audience.

In the closing of the event, Gerrits reiterated our hope that you will “#bringhumanrightshome, that means to our neighbourhoods, communities and by extension to contribute to everyone’s enjoyment of these fundamental freedoms.”

To hear more from our three panelists (re-)watch the recording of the event below (with thanks to The Hague Humanity Hub for the event venue, and Holland Media Park for the event management and recording).

Find out more about the NHC’s event focused on A Story from the Netherlands, entitled:  Suspect to begin with? How do we protect our human rights in the digital age? (Re)watch the event here and find out more here.

About the Human Rights Defence Programme

We believe safeguarding human rights is the responsibility of all people because everyone benefits from having these rights. Those with the knowledge and courage to defend our rights should be encouraged to do so and supported in their endeavours. They should not be persecuted, tried, nor convicted for championing our fundamental freedoms. The Human Rights Defence Programme works towards broadly spreading the message that human rights are important for everyone in society. This is done in order to increase the public’s support for human rights—and for those that defend them—so their work towards positive changes in society can continue and everyone can live in a more peaceful and just world.