Cihan Aydın is a human rights lawyer and President of the Diyarbakır Bar Association in Turkey. Despite the often-dangerous situation for government critics, and especially lawyers in the field of human rights in Diyarbakır, Aydın has remained steadfast in defending the rights of all people. Sustained attention and a proactive strategy by the EU and its Member States is needed to defend Cihan Aydın and other human rights defenders in Turkey from further criminalisation and reprisals for their work.

The portrayal of Aydın’s situation is a continuation of the series, “Defending Human Rights in Turkey: Stories that Need to Be Heard,” told by Tan Tunali, with illustrations by Marco Lambooij. 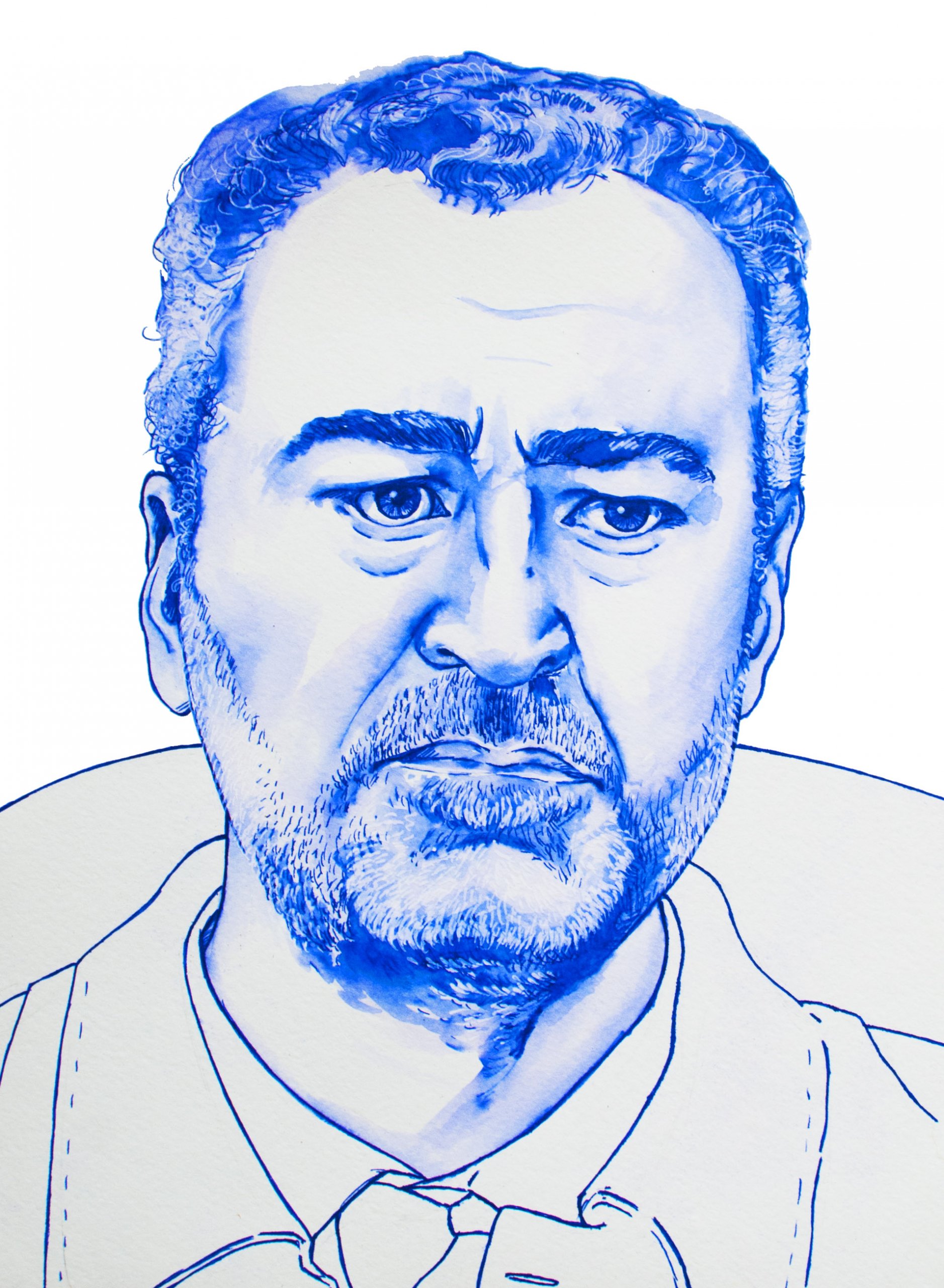 “All Kurdish kids unfortunately grow up with the same dream,” Cihan Aydın, the president of the Diyarbakır Bar Association, said, “They want to fight injustice and become a lawyer.” Back in the 1980s, Aydın, who grew up in a village in the province of Dersim, was one of these kids. “In this region, everybody has lived through tragedies in relation to the state, from extrajudicial killings to enforced disappearances and torture,” Aydın explained. Even though he did not experience such stories in his direct family, they were all around him, and so after finishing high school, Aydın moved to Diyarbakır to study law.

All Kurdish kids unfortunately grow up with the same dream”

In Turkey’s collective memory, Dersim is known for violent state repression. In the 1990s, when the fight between the Kurdistan Workers’ Party (PKK) and the Turkish state reached a violent peak, villages were burnt and tens of thousands of people were displaced. Still, that is not all the region represents to people who grew up there. Speaking to Aydın on the phone over the weekend, he went back to Dersim to enjoy the province’s rich nature. While he tells about his work, birds chatter in the background. “Whenever I find the time, I go to enjoy nature by cycling or hiking, but unfortunately for the last two years I have had very little time to do so,” Aydın said. Aydın, who has been working as a lawyer in Diyarbakır since 1998, has been serving as the Bar’s president since 2018. These past two years were especially busy, with an amendment in the Law on Lawyers (Avukatlık Kanunu), verbal attacks by senior government officials and the quest for justice for Tahir Elçi—one of Aydın’s predecessors who was killed in the summer of 2015. The killing revived old traumas in society at a moment during which the short-lived peace process between the PKK and Turkish state, which had started two years earlier, was in the midst of its collapse.

These past two years were especially busy, with an amendment in the Law on Lawyers (Avukatlık Kanunu), verbal attacks by senior government officials and the quest for justice for Tahir Elçi—one of Aydın’s predecessors who was killed in the summer of 2015″

Last month, Aydın and his colleagues protested an amendment to the Law on Lawyers. From all over Turkey, lawyers took to the capital of Ankara, intending to present their objections to the parliamentary petition committee. With only a few hundred meters to go to the Parliament, they were met by a barrier of armoured police vehicles who blocked their way and prevented them from reaching the building. According to Aydın, such a flagrant violation of the lawyers’ right to protests and freedom of expression can only be explained by fear. “They did all they could to try to prevent our demands from being shared with the public,” Aydın mentioned. Unfortunately, the protest was curbed and the amendment was approved by Parliament.

The change to the legislation is problematic because it allows multiple bar associations to be formed in each province, whereas the previous system only allowed for one association per province. To the dissatisfaction of the government, many of the current bar associations have criticised the state for its human rights violations and the deteriorating rule of law of the country. According to the amendment, now, in provinces with over 5000 registered lawyers, a group of 2000 lawyers can set up their own bar association. Additionally, the three largest bar associations in Turkey, namely those in Ankara, Istanbul and Izmir, will also lose representational power at the national Union of Turkish Bar Associations (Türkiye Barolar Birliği), favouring bars from smaller provinces disproportionally. The changes do not directly apply to the Diyarbakır Bar Association itself, which is an association with over 1500 lawyers, but the objections are more fundamental, Aydın explained. “We believe it is a move to disempower the current bar associations. The law serves a clear political purpose and is presented for securing the government’s political future,” he explained. These changes are seen as presenting an additional risk to the independence and impartiality of the judicial system.

In his work, Aydın always had a special interest in human rights. After having worked at the Human Rights Association (İnsan Haklari Derneği – İHD), he worked on the Justice for Everyone Project (Herkes İçin Adalet Projesi). In this project, Aydın and his team actively engaged with disadvantaged groups such as children, women and inmates. They taught them about their rights in schools, neighbourhoods and prison cells. In the past years, such projects have become difficult to carry out in the increasingly repressive and violent environment. After elected, officials of the pro-Kurdish Peoples’ Democratic Party (HDP) were ousted by emergency decree, and government-appointed trustees were installed in their place. It became nearly impossible for bar associations to cooperate with local authorities.

The Diyarbakır Bar Association has also faced more direct pressure as prosecutors launched investigations against its board members. One case was opened against them after a public statement expressing solidarity with victims of the Armenian Genocide. Another investigation was launched when the Bar Association sided with HDP parliamentarian Osman Baydemir, who was temporarily suspended for using the word “Kurdistan” in Parliament. Both cases against the Bar have since been merged. In April 2020, prosecutors opened an investigation in which the Bar faced charges of “insulting religious values” because it criticised the President of the Religious Affairs Directorate (Diyanet İşleri Başkanlığı), Ali Erbaş, for using inciting language towards LGBT individuals and people with HIV. The trials and investigations were opened in an atmosphere of mounting intimidation and Interior Minister Süleyman Soylu’s verbal attacks. In 2019, he accused the Diyarbakır Bar of “making terrorist propaganda” and operating in coordination with the PKK. Aydın said, “The judicial system serves for a large extent as the government’s backyard, and such remarks obviously influence the prosecutors.”

To the dissatisfaction of the government, many of the current bar associations have criticised the state for its human rights violations and the deteriorating rule of law of the country”

The Diyabakır Bar Association faces a long history of pressure from authorities. Still, the killing of its president Tahir Elçi on 28 November 2015 came as a shock. Elçi was shot in broad daylight while giving a press statement in the historic centre of Diyarbakır. Until today, it remains unclear what exactly happened at the scene. Aydın said the killing reopened old wounds of the past and he once again realised the risks his job brings along, “Working as a lawyer in Diyarbakır, especially in the field of human rights, has always been a job with risks. The threat is always there,” he stated. Shortly after the killing, the peace process collapsed and the repression of Kurds greatly increased. The Diyarbakır Bar Association set out on a quest for justice for its former president. Before the COVID-19 pandemic, it organised weekly protests every Friday in front of the courthouse. At the same time, Forensic Architecture, based in London, conducted an independent investigation into the killing on behalf of the Bar. The multidisciplinary research group based at the University of London concluded that the fatal shot likely came from police officers at the scene and not from the PKK as the Turkish authorities had claimed. In March 2020, a case was finally opened and the first hearing is set for 21 October 2020.

The judicial system serves for a large extent as the government’s backyard, and such remarks obviously influence the prosecutors”

Besides the pressure on the Bar itself, in recent years Aydın and the over 1500 lawyers connected to the Diyarbakır Bar have seen a surge of court cases based on the arbitrarily used Anti-Terror legislation. They experience, on a daily basis, how easy it is to accuse people of being members of a terrorist organisation. “For whoever the government wants to eliminate, they find a secret witness and make them give or fabricate a false statement–there is always a secret witness available. All else it takes are social media posts, and the past attendance of protests, and you are accused of being a member of a terrorist organization,” Aydın stated.

For Aydın, this disregard for the rule of law is a deliberate tactic to demoralise people like himself who stand up for human rights. “They want to instil a sense of hopelessness so that we leave the scene. Luckily, there are many people who stand their ground here,’ Aydın concluded.