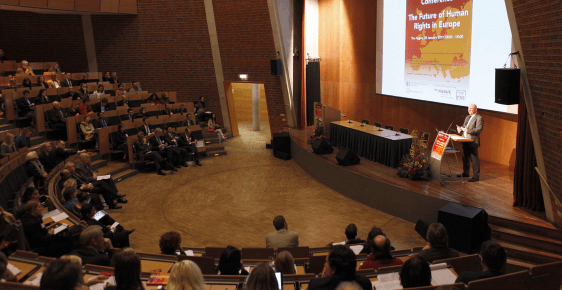 Nils Muiznieks, the Commissioner for Human Rights of the Council of Europe on the 25th of January called on the European Union to take a more determined role in addressing internal human rights issues. He was the key note speaker at the conference on The Future of Human Rights in Europe, organized by the Netherlands Helsinki Committee. Muiznieks said that steps to address the economic crisis should be human rights compliant. A true European-level migration policy with real solidarity should be developed. The Union should require both candidate countries and member states to fully implement verdicts of the European Court of Human Rights.

Both the Commissioner and Mayor van Aartsen of The Hague commended the Netherlands Helsinki Committee on its work during its 25 years of existence. The conference was organized by the NHC as part of its 25th anniversary celebrations, and was attended by around 240 participants. A dozen speakers from academia, the NGO world and official human rights protection institutions spoke at the conference.

The student essay contest on the theme of the conference was won by Wasima Khan with the essay Corporate Power and the Protection of Human Rightsin Equilibrium. The second prize went to Maurice Jeurissen for De toekomst van de mensenrechten in Europa: op zoek naar een nieuwe mentaliteit.

The conference was sponsored by Vfonds and by The Hague University for Applied Sciences, and the essay context by ASN Foundation.