HDIM side event on legal protection of trafficked persons 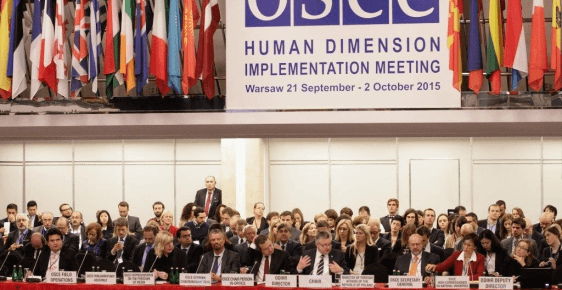 The need to improve access of trafficked persons to legal counseling and aid was the theme of an NHC-organized side event at the 2015 Human Dimension Implementation Meeting. An adequate referral system which ensures that victims are informed about the relevant judicial proceedings and their rights from their very first contact with the authorities is missing in many countries. At the side event, that was held on 28 September, information was presented on the projects of the Netherlands Helsinki Committee and national NGOs on this issue in Slovakia, Romania, Bulgaria, Serbia, Bosnia and Albania.

Traditionally, in any country very few lawyers are trained in working with trafficked persons. Under international arrangements trafficked persons are entitled to legal aid and to protection of their safety and privacy, and they can claim compensation. In many countries these rights have been transcribed into national legislation but are often not well implemented. Many actors in the judicial system, including police, prosecutors, judges and lawyers, lack knowledge about trafficking and its psychological, social and health impacts on its victims.

At the side event, human trafficking expert Marjan Wijers spoke about how the projects which the NHC has coordinated address this gap between standards and practice: by capacity building of social workers, lawyers, prosecutors and magistrates, by monitoring the state of legal representation of trafficked persons and of court practice, and by advocating policy change where needed. The NHC is planning to strengthen networking across Europe of lawyers involved in legal counseling and representing trafficked persons.

Marija Andjelkovic of anti-trafficking NGO Astra from Serbia presented an analysis of the position of trafficked persons in court cases, confirming that continued attention is needed for the protection of safety and privacy in trials against persons suspected of trafficking. Natasha Dobreva, a lawyer providing legal aid and representation to trafficked persons in Bulgaria, working with NHC partner-NGO Animus spoke about several cases in which the rights of trafficked persons were grossly neglected by law enforcement and judicial authorities. A recent judgement by the European Court for Human Rights makes clear the seriousness of this problem in Bulgaria. The Court concluded it was “a cause of particular concern that the authorities had not deemed it necessary to examine the applicant’s allegations of the possible involvement in this case of an organised criminal network of trafficking in women”.

Several participants in the side event spoke about their own experience with rights protection of trafficked persons. It was noted that states are generally reluctant to provide protection to trafficked persons by extending residence permits. This matter merits further comparative study.