IDFA premiere of ‘Judges under Pressure’ in Carré, Amsterdam

I have tears in my eyes. Rule of law is a very abstract notion but having seen this movie I hope people will understand why it is so important – Dorota Zabłudowska, Polish Judge, Board Member IUSTITIA 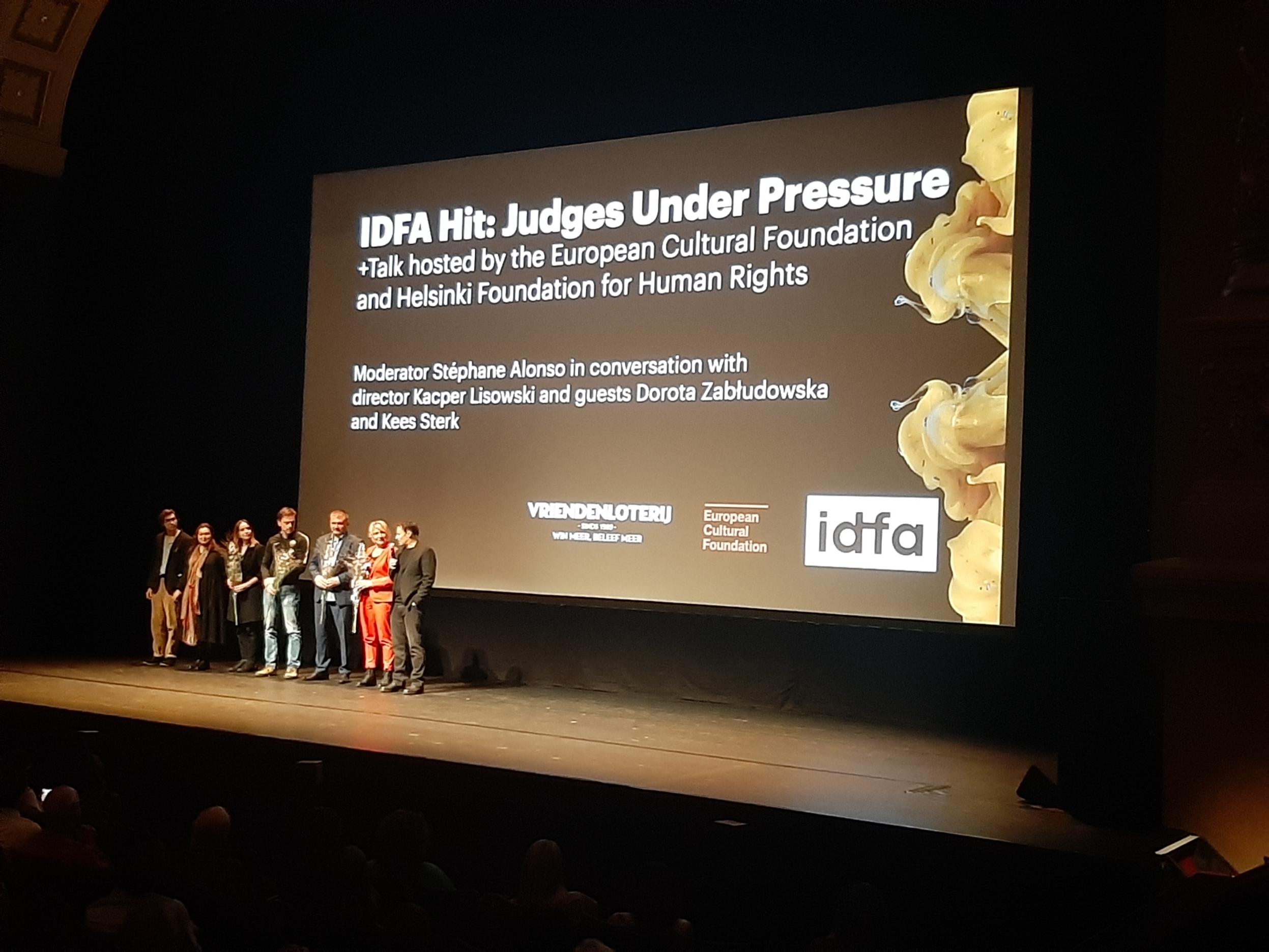 Pushbacks on democratic norms and values, including the implementation of anti-abortion laws to the breaking down of judicial freedoms, have become synonymous with the Poland’s Leadership over the past years. Fervent Rule of Law backsliding has led to an incredibly difficult working situation for people across civil society. One group in particular is bearing the brunt of the constant battering to Poland’s Rule of Law: law makers themselves, and there are a number of judges who continue to fight tooth and nail for judicial independence.

It is rather straight forward what independence of judiciary is {…}. These v are so important you have to do everything to restore it. – Kees Sterk Dutch Senior Judge, Former President of the European Network of Councils for the Judiciary (ENCJ)

On 20 November 2021 the premiere of Judges under Pressure by Kacper Lisowski took place as part of the International Documentary Film Festival Amsterdam (IDFA) in Theatre Carré. The documentary followed the lives of Judge Igor Tuleya and numerous other judges and was a moving and human portrait on how the crackdown on the Rule of Law in Poland affects the country, not only on a systemic level, but also on a very personal level. In particular the documentary shone a light on the exhaustion of the judges after already six years of fighting for judicial independence.

The event was followed by a panel discussion with the film maker Kacper Lisowski, Polish Judge Dorota Zabłudowska and Dutch Senior Judge Kees Sterk, which was moderated by Stéphane Alonso, a journalist for the NRC who resided in Poland for a number of years. Prior to the panel discussion, the whole production team of the film, Judge Zabłudowska and Judge Waldemar Żurek got on stage to receive flowers and say a few words about the premiere. When Judge Żurek – who has a prominent role in the documentary – took to the stage, he received a standing ovation.

After the screening, the emotion in the room was palpable and as the production team and the protagonists from the movie stood on stage there was a clear on their part. During the panel they discussed the current situation, as well as what can be done, the importance of European solidarity and why in this case other European judges should also speak up.

I must try to help my colleagues who are not only Polish judges but, like me, are European judges. – Kees Sterk, Dutch Senior Judge, Former President of the European Network of Councils for the Judiciary (ENCJ)

For the promotion of the film, NHC’s local partner in Poland, the Helsinki Foundation for Human Rights worked closely with the director and spread awareness on the plight of judges in Poland. The documentary will also be screened at HFHRs own film festival: Watchdocs.

The NHC is proud to have participated in the sharing of this powerful documentary, we strongly believe in the importance of solidarity, as well as the strength of storytelling in making abstract constructs like rule of law more concrete and personal. As NHC we are working together with actors across Europe to defend the rule of law, want to know more? Subscribe for our newsletter below!