Nadire Mater is a journalist who has dedicated much of her career to freedom of expression. She has been judicially targeted for her solidarity to the pro-Kurdish newspaper Özgür Gündem. Sustained attention and a proactive strategy by the EU and its Member States is needed to defend Nadire Mater and other human rights defenders and journalists in Turkey, from further criminalisation and reprisals for their work.

The portrayal of Mater’s experiences is a continuation of the series “Defending Human Rights in Turkey: Stories that Need to Be Heard,” told by Tan Tunali, with illustrations by Marco Lambooij. 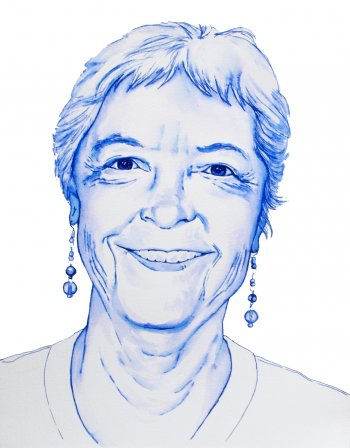 A water-colour depiction of Nadire Mater

Nadire Mater is 70 years old, but time has not taken a toll on her fighting spirit. This became immediately apparent when we sat down at the Bianet office in central Istanbul. Twenty years ago, Mater was one of the founders of Bianet—a multilingual online media platform that focuses on a wide range of human rights issues. “From an early age I was interested in rights issues, not only my own rights but also the rights of others,” she recalled. She thought that journalism would allow her to stay close to this interest.

Yet, Mater was not always a journalist. She started her working life as a social worker, but the 1980 coup put an end to her career. After the coup, she took up journalism. “It wasn’t my dream job or anything, but I found a job in journalism, so I became a journalist,” she explained. In the years after the coup, she worked for several media outlets, including the renowned magazine Nokta, the news agency Interpress Service (IPS), and Sokak magazine, which she founded together with friends. She also worked as the Turkey representative of Reporters Without Borders.

The goal was to create space in the media for those who have no voice,” – Nadire Mater

Working at Bianet allowed Mater to further develop her interest in human rights. When creating the media platform, a group of journalists and academics tried to find out whether a different approach to media is possible. “The goal was to create space in the media for those who have no voice,” she explained. Looking back, Mater concludes that they managed to achieve this goal. “We proved that a different approach to communication in media is indeed possible,” she said. Bianet not only produces content, but it is also involved in educational projects, teaching aspiring journalists how to report news in a responsible way. “The help of academics was very important in this regard. They did important theoretical groundwork,” Mater said. On the bookshelf behind her, I saw dozens of booklets on a variety of subjects: from how to report on gender-based topics to reporting focused on children, but also a handbook on media ethics. The next generation is working diligently in the newsroom.

In addition to her work at the office, Mater, like many of her colleagues, spends quite some time in and around courthouses to support prosecuted colleagues and friends. Mater has participated in countless solidarity demonstrations throughout her career, most prominently the Saturday Mothers—a group of women whose loved ones forcibly disappeared during the 90s. In a weekly sit-in, now supported by a bigger group, they demand that the people responsible for the disappearances are punished. Even though local authorities banned these peaceful sit-ins in August 2018, they continue their protest every Saturday in Istanbul. At the time of this interview, the group has completed its 748th meeting. “The people who are responsible are still not convicted for their crimes, but at least we don’t lose people the same way anymore,” Mater said.

In the 90s, Mater participated in a solidarity campaign with the Kurdish newspaper Özgur Ülke when its office was bombed in 1994. “Us simply being there was so important for our colleagues, because Kurdish journalists have generally been left alone. If this wouldn’t have been the case, they wouldn’t have faced so many problems,” Mater explained. When she was asked to participate in a solidarity campaign in 2016 with the pro-Kurdish paper Özgür Gündem, it was only natural to join. “I believe it is something all journalists should do,” she added. Together with other prominent journalists and authors, she supported the paper while it was under pressure by acting as a guest editor-in-chief for one day. After the coup attempt of 2016, the paper was closed by an executive decree and many editors were arrested. Unlike in 1993, the guest editors-in-chief, including Mater, were put on trial for supporting the newspaper.

Those who were prosecuted for their contribution to the solidarity campaign are now part of the Editor-in-Chief on Watch Campaign trials. Mater criticised the arbitrariness of Turkey’s broken justice system. “The ones who are standing trial don’t know what they are persecuted for. They are simply not told!” She reminded us that the repression of Özgür Gündem is part of a wider, deeply rooted crackdown on critical media in Turkey, which further intensified after the coup attempt of July 2016. Currently, dozens of journalists are imprisoned for charges related to degrading the State and many media outlets have been shut down.

Mater faced a judge herself in November 2016 for the same Özgür Gündem solidarity campaign. During her defence, she stressed the importance of a plurality of voices in the media. She received a 15-month deferred prison sentence. Similarly, judges handed down prison terms to several other guest editors for “making propaganda for a terrorist organization,” and many of the sentences were deferred. But some human rights defenders, such as journalists Murat Çelikkan and Ayşe Düzkan respectively spent 2 and 4,5 months of their 18 months sentences in prison. Some of the hearings are still ongoing. However, most recently, Reporters Without Borders Turkey representative Erol Önderoğlu, forensic doctor Şebnem Korur Financı and writer Ahmet Nesin were the first from the solidarity campaign to be acquitted after a 3-year trial.

They told me that I made everything up. But how could I have done that? I’m not Tolstoy, am I?” – Nadire Mater

2016 was not the first time Mater was taken to court by the Turkish state. In 1999, she published Mehmedin Kitabı (Mehmet’s Book)—a book that tells the stories of 42 soldiers who fought for the Turkish army in the predominantly Kurdish southeast during the violent conflict between the Turkish state and the Kurdistan Workers’ Party (PKK). According to Mater, the case clearly shows why journalists in Turkey are put on trial. “I wasn’t the subject [of the persecution], but the book was. The people talking in the book were the young guys who did their compulsory military service in a warzone. It was their words that were persecuted.” After the fourth print, the book was banned and a confiscation order was issued. In 2001, Mater was acquitted for insulting the military. “They told me that I made everything up. But how could I have done that? I’m not Tolstoy, am I?” she asked.

Unlike in previous campaigns, this time Mater found herself on the receiving end of solidarity. She recalled that colleagues from many countries flew in for a day to attend her trial and report on it in their home countries. It is something that can often be seen in the current oppression in Turkey: People who dedicate their lives to support the struggles of others are not left alone when they are in trouble. Mater observed that the solidarity is especially strong amongst journalists. The fact that colleagues attend each other’s trials is testimony to this solidarity, she argued.

Mater is upset with the state her country finds itself in, but it does not inhibit her unbridled positivism. She even takes her own trial with a smile. “We didn’t receive much attention with our initial solidarity campaign. After the court cases, we made it to the news as ‘terrorist journalists.’ That’s when our story spread. We protested in front of the court house and journalists, including Kurdish journalists, stood with us in solidarity,” she concluded.