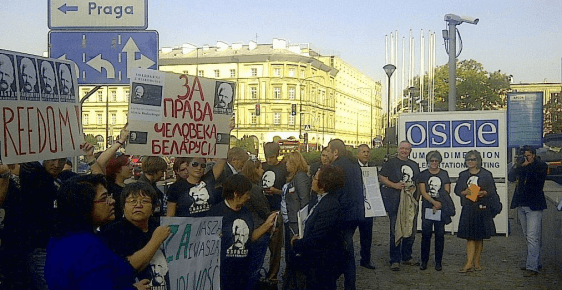 As in previous years, the NHC will be represented at the annual OSCE ODIHR Human Dimension Implementation Meeting, to be held in Warsaw from 21 September to 2 October. The NHC is involved in the organization of three specific events during this year’s meeting.

On 21 September, the NHC will moderate a side event on media freedom in the digital age, held on the initiative of the Permanent Mission of the Netherlands to the OSCE. The side event will look at recent developments in the protection of the right to freedom of information on the Internet, both the freedom to publish and to access information, and the freedom from interference with information stored or exchanged electronically. The policies, as well as the practices of OSCE participating states will be presented and discussed by a panel including Dunja Mijatovic, the OSCE Representative on Freedom of the Media, Kees van Baar, the Human Rights Ambassador of the Netherlands, Menso Heus of media freedom NGO Free Press Unlimited, Ceren Sözeri of Galatasaray University.

On 23 September, together with our Polish sister-organization Helsinki Foundation for Human Rights, a side event will be held at which speakers from a number of countries on the specific role of prosecutors and judges in the persecution of human rights defenders. Angela Kaptein, Appeals Court judge in The Netherlands, and Krzysztof Karsznicki, member of the National Prosecution Council of Poland (tbc) will comment on these reports from the perspective of professional standards.

Finally, on 28 September, the NHC is organising a side event on the legal protection of trafficked persons, in which experiences from a range of projects which the NHC has coordinated in southeast and central Europe will be presented by a panel. The panel exists of Marjan Wijers, a Dutch expert on the subject, Marija Andjelkovic, director of ASTRA-Anti-trafficking Action from Serbia and Natasha Dobreva, a Bulgarian lawyer who has provided legal aid an representation to trafficked persons.

The Human Dimension Implementation Meeting (HDIM) is Europe’s largest annual human rights and democracy conference, and is organized each year by the OSCE Office for Democratic Institutions and Human Rights (ODIHR). There will be 57 OSCE participating states, Partners for Co-operation, civil society, international organisations and OSCE structures that will take stock of the implementation of the human dimension commitments, discuss associated challenges, share good practices and make recommendations for further improvements.