Amidst lockdown measures due to the corona crisis, Pride was celebrated virtually for the first time by LGBTQ civil society organiations and allies in Tirana, Albania and other cities throughout the Western Balkans. The events took place around 17 May the International Day Against Homophobia, Transphobia and Biphobia (IDAHOT). 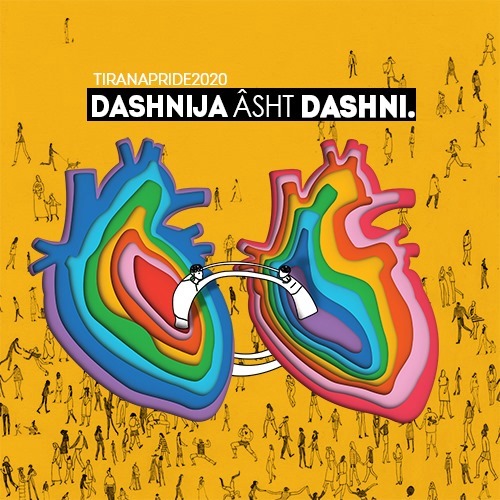 In Tirana, Albanian LGBTQ NGOs organised an alternative pride while taking into account the lockdown orders during the current pandemic. The NGOs decided to join forces and found creative ways to show their support online. Organized by Aleanca LGBTI, Pro LGBT and Streha LGBT Centre, the day consisted of various activities and was joined by over 100 Albanian LGBTI activists and allies. These activities include a two-hour-long Zoom parade, an online book club and a balcony pride. For the balcony pride, LGBTQ communities and allies were asked to show their support by raising the LGBTQ flag on their Balconies. The celebration of pride on the IDAHOT kicked off a month of awareness- raising campaigns to bring attention to the history of famous LGBTQ people and activists that reshaped the world.

Celebrating pride during lockdown was reflective of the LGBTQ experience in Albania every day, by feeling locked up. With a focus on the current pandemic, stories on the lives of the LGBTQ community under quarantine was shared through a photo exhibition and videos.

The NHC in partnership with COC Nederland, Aleanca LGBTI and Pro LGBT is working on strengthening the response of the police to hate crime and discrimination against the LGBT community in and improving cooperation across justice chain partners in Albania.

Celebrating pride during lockdown was reflective of the LGBTQ experience in Albania every day, by feeling locked up.”

Besides facilitating trainings and study trips to visit police officers in the Netherlands to counter the worrying trend of underreporting of hate crimes and discrimination in Albania, the project also focuses the development of an awareness-raising campaign. This campaign raises awareness and encourages action in support of human rights issues, such as internal diversity, inclusion, equality and respect for groups vulnerable to hate crime and discrimination. A key aspect of the work relates to building bridges between local actors, civil society and public institutions— such as the police.

(Check out this interview with Sidita Zaja of Pro LGBT to learn more about how cooperation between civil society and police is going.)

The campaign will target both the Albanian Police and the LGBTI community, and involves the development of several tools and materials aimed at promoting diversity within society. Project partners hope to encourage police officers, NGOs, and municipalities to work together in increasing acceptance of the LGBTQ community amongst the general population, through organizing joint events, while still taking into account the rules on physical distancing currently in place in the country.

Pride in the Balkans, at a time when love still manages to overcome the physical barriers imposed by the pandemic of COVID-19. ?

The video was made during her online campaign Tirana #PrideON, the first virtual parade of pride.

The realization of the video was made possible by the office of the Council of Europe in Tirana.