Sebla Arcan is a human rights defender who has dedicated much of her life to demanding justice for those who have been subject to enforced disappearance in Turkey. Despite being taken into custody and facing violence from the state, Arcan has remained steadfast in her support for the Saturday Mothers. Sustained attention and proactive strategy by the EU, its Members States and the international community as a whole is needed to defend the space in which Sebla Arcan, the Saturday Mothers and other human rights defenders work without risk of reprisals and unfounded litigation for their work.

The portrayal of Sebla’s experiences is a continuation of the series “Defending Human Rights in Turkey: Stories that Need to Be Heard,” told by Tan Tunali, with illustrations by Marco Lambooij. 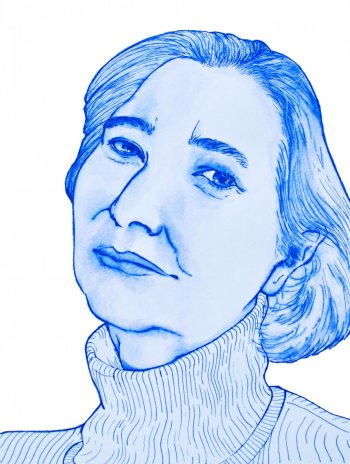 A water-colour depiction of Sebla Arcan

Sebla Arcan is working as an economist for a living, but her real passion is in the struggle of the Saturday Mothers (Cumartesi Anneleri). She is the spokesperson for the group, which, for 25 years, have been demanding answers from the state about missing relatives that have been subject to enforced disappearance by Turkish state forces. Following her mother-in-law’s footsteps, Arcan became involved with the group through her volunteer work for the Human Rights Association (İnsan Hakları Derneği, İHD) in the ‘90s (Read the stories two others who worked at İHD here: Raci Bilici and Gönül Öztürkoğlu). Despite not having lost a family member through enforced disappearance herself, Arcan became an integral part of the Saturday Mothers. “I believe you don’t need to be subject to rights violations to be part of a struggle,” she said. For her it is a matter of conscience, “I do it to be able to sleep at night, to be a good person,” she explained.

The modern Republic of Turkey inherited the practice of enforced disappearances from the late Ottoman Empire. The first reported case took place in 1936, when Salih Bozışık, a workers’ leader and member of the Turkish Communist Party (TKP), “disappeared” in police custody. In the period following the 12 September 1980 military coup, the İHD recorded the enforced disappearance of 15 people. However, it was not until the ‘90s that it became a common practice in Turkey—the government’s way of silencing critics. “With the excuse of counterinsurgency programs, all freedoms were brushed aside in every part of Turkey. [The disappearances] had taken the form of systemic state terrorism,” Arcan said.

I believe you don’t need to be subject to rights violations to be part of a struggle,” she said. For her it is a matter of conscience, “I do it to be able to sleep at night, to be a good person”

In 1995, Arcan joined İHD’s Committee on Enforced Disappearances (İHD Kayıplar Komisyonu), which started documenting cases. Between 1992 and 1996, İHD reported 792 cases of enforced disappearances and murders committed by the state. Due to the danger associated with reporting, the real number remains unknown. “Family members were threatened, forced to flee to different provinces and risked to be disappeared themselves,” Arcan explained. Several İHD administrators looking into cases in the predominantly Kurdish southeast, where a majority of state-forced disappearances took place, were forcibly disappeared themselves. Throughout the ‘90s, Arcan herself was taken into custody, faced violence, and stood trial multiple times for her work as a human rights defender. She has been acquitted in all the trials she stood.

The repression of the state meant the disappearances happened away from the public eye, especially in the west of the country where Arcan was living at the time. But in 1995, the case of Hasan Ocak, who was arrested after violent unrest in Istanbul’s Gazi neighbourhood, set things in motion. His family, and especially his mother Emine Ocak, campaigned vigorously to learn what his fate was. Witnesses had seen Ocak being taken away by the police and 55 days later his body was found in an unmarked cemetery. His fingerprints were inked, his belt and shoestrings were gone—all procedural measures indicating an arrest. The authorities initially denied any wrongdoing, but eventually the Minister of State, Algan Hacaloğlu, was forced to admit the state’s responsibility.

If you now ask a random person on the street about forced disappearances, they will respond: ‘Are you talking about the Saturday Mothers?’”

It was the first time the Turkish government openly admitted culpability in an enforced disappearance. Despite this, no judicial process followed the admission of guilt. The prosecutor simply stated that the Turkish police does not kill or torture so he saw no need to open an investigation. “Then we realized that we couldn’t expect anything from legal proceeding,” Arcan recalled. One week later, five families who also lost their loved ones started a silent sit-in on Galatasaray square in central Istanbul (Check out Nadire Mater’s story, who has participated in countless gatherings of the Saturday Mothers). The group wanted to expose the cruel actions of the state to society and demanded the end of enforced disappearances. Inspired by the mothers of the Plaza del Mayo in Argentina, they chose to do this sit-in protest in the centre of Turkey’s largest city; each carries the photos of the ones who were lost while telling their stories.

This action worked. The protest gained widespread attention in Turkey and abroad; mainstream media began reporting on Hasan Ocak’s case. Renowned artists like Sezen Aksu and U2 recorded songs to bring even more attention to the protest. As a result enforced disappearances have stopped in the country. Moreover, Arcan pointed out that the movement, which now counts hundreds of people, managed to create widespread awareness in society. “If you now ask a random person on the street about forced disappearances, they will respond: ‘Are you talking about the Saturday Mothers?’”

After 31 years they managed to find every single person who interrogated and tortured Cemil Kırbayır. All you need is the political will to show that as a government you do not want it to happen again,”

These achievements did not come without a price. Between 1999 and 2009, the group was forced to stop protesting due to weekly attacks and arrests by the police. Two years after the sit-ins resumed, Arcan and the relatives of people who have been forcibly disappeared, representing all the Saturday Mothers, were received by then-Prime Minister Recep Tayyip Erdoğan. Each mother told their story and urged the Prime Minister to find those responsible for the disappearances and let justice prevail. They also demanded that Turkey sign the International Convention for the Protection of All Persons from Enforced Disappearance—a treaty to which Turkey is still not a party.

After the meeting with Prime Minister Erdoğan in 2011, a parliamentary research commission was established to look at the case of Cemil Kırbayır. Kırbayır was forcibly disappeared from the northeastern province of Kars during the 1980 military coup. The commission wrote an extensive report, after having spoken to all the people responsible for Kırbayır’s torture and disappearance. Once again, things stalled at the desk of the prosecutor, who refused to open an investigation. After Erdoğan’s government moved away from its democratisation agenda and EU accession negotiations, no other cases were investigated.

Despite this, Arcan remains hopeful. She sees the 2011 report as proof that there are possibilities to investigate enforced disappearances, regardless of how long ago they happened. “After 31 years they managed to find every single person who interrogated and tortured Cemil Kırbayır. All you need is the political will to show that as a government you do not want it to happen again,” she stated. The circumstances changed and what remains is the feeling that a lot could have been achieved at the time. But the Saturday Mothers were not surprised, they knew the workings of the Turkish state. “If it would be openly investigated, it would prove that people that are still working for the state today have committed crimes against humanity,” Arcan explained.

It may be our biggest achievement. We were young when we started, we aged in the square. The children of the disappeared grew up on the square where we saw each other every week. Many people don’t even see their own family every week. I could say that we have become one big family.”

A real turning point came in 2018 when the Saturday Mothers were barred from holding their 700th peaceful weekly protest. The sit-in was once again met with police violence; they were branded “terrorist mothers” by the same government which seven years earlier received their delegation and listened to their demands. Arcan and those who lost family members by enforced disappearance were taken into custody. Arcan says that by forbidding the vigil in Galatasaray square the government wants to send a message of warning to society. In describing this message, she says, “Do not go on the street and do not disobey us. [The government] wants to give people the feeling: if this can be done to the Saturdays Mothers what would they do to me?” Every Saturday since, armoured police vehicles occupy Galatasaray square to block the protest, forcing the Saturday Mothers to hold their sit-in in front of the building of İHD, a few blocks away. Arcan is currently being investigated for “making terrorist propaganda” for reading a press statement in April 2019 about Talat Türkoğlu, a person forcefully disappeared in 1996.

In the meantime, several mothers have passed away, but now the wives and children of the disappeared continue the protest. Arcan finds that the inter-generational dimension of the ongoing protest is very special. Reflecting on the movement, Arcan shared, “It may be our biggest achievement. We were young when we started, we aged in the square. The children of the disappeared grew up on the square where we saw each other every week. Many people don’t even see their own family every week. I could say that we have become one big family.”

Due to the COVID-19 pandemic, the Saturday Mothers were forced to move their protest online. Every Saturday at noon, they hold a press release and tell the story of one of their loved ones. The group publishes videos and organises events. The attendance is higher than usual; thousands of people tune in to listen to the stories of the group. “Online, people don’t have to face a police blockade,” Arcan joked. The Galatasaray square remains under police barricade, but Arcan is already thinking about their return. Undeterred, and with the determination that characterises the protest, Arcan cannot wait to be back outside. “When the health of the participants allows us, we will be back on the streets again,” Arcan concluded.